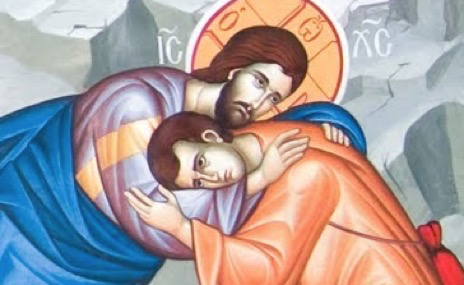 In the first centuries of Christianity when the followers of Christ were cruelly persecuted by the authorities, a priest by the name of Sapricius and a layman by the name of Nicephorus lived in the city of Antioch.  The other people considered them to be natural brothers because they loved each other so much.  They lived with sincere love for a long time until the devil, being very jealous of their harmonious life, succeeded in planting the seed of strife between them.  Under his influence they quarreled, were separated, and came to hate each other so much that they did not even want to meet each other on the road.  After living like this for quite a while, Nicephorus came to his senses and when he realized that their mutual hatred came from the devil, asked some of his friends and neighbors to go to the preist Sapricius and to ask him for forgiveness.  Sapricius, however, did not forgive him, and Nicephorus repeated his attempt for reconciliation.

He then sent people for the third time, but it was all in vain—Sapricius hardened his heart and remain implacable.  At last Nicephorus himself went to Sapricius, fell at his feet, and humbly began to beg, “Forgive me, Father, for God’s sake, forgive me!”  Sapricius did not even look at him, and Nicephorus went away from him disgraced and rejected.

At this time, an unexpected persecution against the Christians broke out in Antioch.  The more distinguished Christians were arrested first, and Sapricius, being a priest, was among them.  When they brought him before the governor for questioning and asked him what his name was, he said, “Sapricius.”  “And from what family are you?” the governor asked him.  “I am a Christian,” was the firm reply.  “Are you a clergyman?”  asked the governor again.  “I am a priest,” said Sapricius.

Then the governor said, “Our king, the ruler of this land, ordered all Christians to sacrifice to the gods.  And whoever does not obey the king’s order must know that he will be sentenced to death after various tortures.”

Sapricius stood before the ruler and without flinching answered, “We Christians, O governor, have Christ as King, because He alone is a true God and Creator of the heavens, the earth, the sea, and everything that is in them.  And all the gods of the pagans are demons.”

At these words the governor was enraged and ordered that Sapricius be tortured very cruelly.  The sufferer endured all tortures bravely and said to the governor, “You have power over my body, but not my soul.  Only my God, Jesus Christ Who has created it, has power over it.”

The judge, when he saw Sapricius’ firmness, sentenced him to death by beheading, and the martyr was led to the place of his execution.

In the meantime, Nicephorus heard about all of this, ran out of his home, intercepted Sapricius on the road, fell at his feet, and began to implore him, “Martyr of Christ, forgive me!  I have sinned against you.”

Sapricius did not answer.  His heart was still filled with demonic spite.  The humble Nicephorus hurried along another street, again intercepted Sapricius, and implored him:  “Martyr of Christ, forgive me!  As a human I sinned against you.  Now you are being given a heavenly crown by Christ, because you confessed His Holy name before many witnesses.”

Sapricius, blinded by hatred, remained implacable.  Even his tormentors wondered at his obstinacy and bitterness and spoke to Nicephorus:  “We have never seen such a crazy man as you.  This one is going to his death, but you are asking him so persistently for forgiveness!  Can he harm you even after his death?  Why do you need to make peace with him?”

Nicephorus replied, “You do not know what I am asking of the confessor of Christ, but God knows.”  When they came to the place where Sapricius was to be beheaded, Nicephorus again said to him, “I beg you, martyr of Christ, forgive me!”

Nicephorus begged for a long time, but Sapricius did not have pity on him.  God then took away His grace from Sapricius, and he immediately fell away from Christ.  When his tormentors told him to bow down so that they could cut off his head, he suddenly became afraid and cried, “Do not kill me!  I will do everything that the king orders.  I will bow to the gods, and I will sacrifice to them.”  Thus Sapricius lost God’s grace and his salvation with it, because of his spite.  Neither the endured tortures nor the admonitions of the good Nicephorus not to deny Christ at the end of his feat helped.  Then the Blessed Nicephorus confessed before the executioners that he was a Christian and that he, like the rest of those who believed in Christ, did not and would not sacrifice to the gods; and he asked that he be killed in the place of Sapricius.  After consulting the governor, the tormentors let Sapricius go free and killed the Blessed Nicephorus.

Thus Sapricius fell away from Christ and passed away in his malice.  Nicephorus was honored with martyrdom and was saved.

When we hear of the behavior of the inexorable Sapricius, we unwittingly remember the wondrous words of the holy Apostle Paul, “And though I bestow all my goods to feed the poor, and though I give my body to be burned, and have not charity, it profiteth me nothing,” (I Cor. 13:3).  Even martyrdom without love does not save.  Even though you may have carried out the greatest of feats, if you are irreconcilable to your personal enemies, you are destroying all your good deeds and dooming yourself to death.

From The Meaning of Suffering and Strife & Reconciliation by Archimandrite Seraphim Aleksiev, available from St. Herman Press