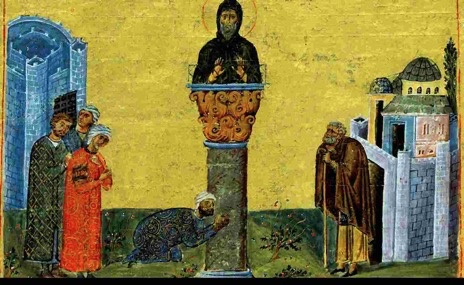 On this day in the Coptic calendar, Pashons 11, we celebrate the Feast of the Holy Simon the Stylite. In the Eastern Orthodox Church, he is known as Symeon the Stylite and his feast is celebrated on September 1. He was a 5th c. Syrian saint who is remembered for living as a hermit atop a pillar for an astounding 45 years.

In the Coptic Synaxarion, the entry for the feast of his departure reads as follows:

On this day of the year 461 A.D., St. Simon departed. He was born in Antioch in 392 A.D. His father’s name was John, and his mother’s name was Martha. Many miraculous things happened because of him. Before his mother had conceived of him, St. John the Baptist appeared to her in a dream and told her of her conception and what he would become. At age sixteen, he became a monk in the mountain of Antioch, and he led a great ascetic life in worship and prayer. An angel of the Lord appeared to him in a dream and guided him in his monastic life to the life of St. Pachomius. He excelled in his worship to a level beyond the normal human level, so that he lived alone on a high place like a pillar, for 45 years, during which he ate grass. This father wrote many useful ascetic teachings, and explained many church books. He departed in peace. May his prayers be with us, and glory be to God forever. Amen.

Interestingly, the entry in the Synaxarion for the translation of his relics (Mesori 3) provides more detailed information concerning his life:

On this day, St. Simeon (Simon) the Stylite, departed. He was from Syria and he had shepherded his father’s flocks since he was young. He regularly attended the church. The Grace of God moved him and he came to one of the monasteries, where he stayed and worshiped God in great asceticism. He exerted himself with much fasting and excessive thirst. Then he tied a rope around his loins until it pierced his flesh, and a repulsive smell came out of him. When the other monks were offended by his smell, he left the monastery and came to a pit where he dwelt for a short time. The abbot of the monastery saw in a vision, as someone was telling him, “Why did you send away My servant Simon? Seek him, and bring him back,” as if the voice was rebuking them for his dismissal from the monastery. The abbot informed the brethren of this vision and they became troubled and they began to look for St. Simeon until they found him in the pit, without food or water. They confessed to him their transgression, asked for his forgiveness, and brought him back to the monastery. When they started to exalt him, he felt that he was unworthy, so he left the monastery secretly, and came to a certain rock, where he lived for sixty days without sleeping. Afterwards, the Angel of the Lord came to him, comforted him, and told him that God had called him for the salvation of many souls. Then he dwelt over a pillar, thirty cubits in height, for fifteen years. He performed many signs and great wonders, and preached to all those who came to him. His father sought him, but did not find him and he died without seeing him. His mother, after a long time, found out about him, so she came to him where he was staying on that pillar. There she wept greatly, then she slept under that pillar. The Saint asked the Lord Christ to have mercy on her. His mother died while she was sleeping, and they buried her under the pillar. Satan became envious of the saint for all his good deeds, and moved against him. He smote him in one of his legs with ulcerations which forced him to use the other leg for many years, until the diseased leg rotted, and worms dropped from it under the pillar. A chief of a band of thieves came to him and slept under his pillar. The Saint prayed to Christ on his behalf, and he stayed for a few days, and died. The Saint asked Christ to supply him with water, and a spring of water sprang up at the foot of the pillar. Then he moved to a taller pillar, where he stayed on top for thirty years. After he completed forty-eight years in worshipping, he departed to the Lord. He preached many people, taught them, and brought many back to the knowledge of Christ. When the patriarch of Antioch heard about his departure from this world, he came to him and took his body to Antioch in great veneration. May his prayers be with us. Amen. 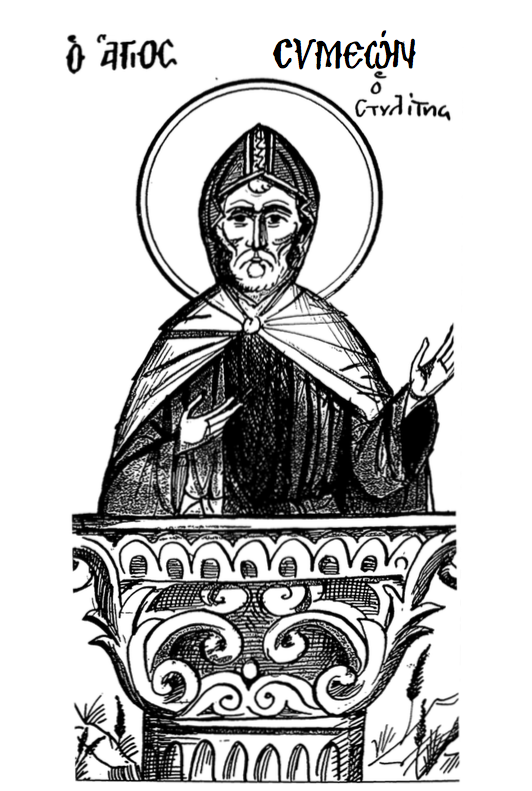 In his book, The Hermit Fathers, Fr. Samaan El-Souriany notes that Simon was not only a blessed hermit, but the father of all stylites, i.e., those who ascended and lived on impossibly high places:

The Syrian monks were great individualists and they deliberately imposed on themselves what is hardest for human beings to bear. Their most typical representatives in the fifth century were the ‘Stylite’ saints, men who lived for very long periods on the top of a pillar. The first to adopt this way of life was Simon the Stylite who lived for forty years on a fifty-foot column outside Antioch.

Volume 1 of the Evergetinos records how this new form of asceticism was viewed by other ascetics at the time and how it came to be seen as the will of God:

When St. Simon was contemplating living on a pillar — an unprecedented form of asceticism — and reports about him had spread throughout the desert, the ascetics were astounded by this novel and strange undertaking, and they sent some representatives to him. They ordered them, on the one hand, to reprimand St. Simon for this curious invention of his and, on the other hand, to instruct him to traverse the accustomed path of asceticism traced by the holy Fathers and not to look down upon it, since thereby multitudes of blessed ascetics had ascended to the heavens and found rest in the eternal tabernacles.

But then, fearing lest this idea of St. Simon might be pleasing to God, while they viewed the matter in a human way, they also gave these instructions to their representatives: If they saw the man immediately departing of his own will and descending from his pillar in obedience to them, they should at once restrain him and order him to remain stead­ fast in his purpose. For in this way they would be convinced that Simon’s ascetic feat was Divinely ordained, and they would not be afraid for the future-that such a beginning in asceticism would not have a good end. But if he took umbrage and would not tolerate listen­ ing even for a short while to their advice, but doggedly and heedlessly followed his own will, it would become quite obvious that he was far re­ moved from humility; in which case, who would not say that the Evil One had suggested this idea to him? Therefore, if such were the case, the Fathers of the desert instructed their representatives to bring him down from the pillar, even if by force and even if against his will.

After receiving this command, the envoys of the ascetics reached Simon, the Father of humility and obedience; but as soon as they saw him and greeted him, they were overcome by reverence for him and were unable to look at his face. However, on account of the order of the Fathers who had sent them and for the sake of the service to which they had been assigned, they related to him in detail what the Fathers had told them. St. Simon, truly meek and humble of heart, listened to the reprimand without offering any objection; he neither grew angry nor argued nor said anything at all-neither a little nor a lot. He immediately accepted the reproof and, with eyes lowered and with a kindly countenance, gave thanks to God and expressed his gratitude to the Fathers for their concern for him; and without any hesitation, he under­ took to descend from his pillar. The envoys at once restrained him and made known to him the mind of the Fathers. They then besought him to remain steadfastly and unceasingly on the pillar, and, wishing him a good end, that he might find sure rest from God for his constant labors, they departed.

In his article, Reading the Lives of the Saints, James Skedros notes that Simon’s fame spread to Armenia, Spain, and even Britain. Many came to see him worshipping God on top of that solitary pillar. The saints healed many people of various physical and spiritual sicknesses. Even after his departure, his pillar was treated as a pilgrimage site and the center of a massive church complex.

The Coptic Synaxarion refers to at least one of his disciples, the Holy Agathon the Stylite, who constantly read the life of Simon and eventually imitated him.

May the prayers of this great saint, a founder of a new form of asceticism like Abba Antony the Great, be with us today and throughout our lives.

One Response to "The Feast of the Great Syrian Ascetic, the Holy Simon the Stylite"