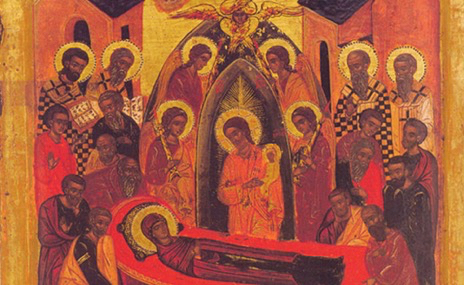 On Thursday, 27 January (21 Tuba), faithful in the Coptic Orthodox Church celebrate the Feast of the Dormition of the Holy Theotokos Mary. In this blessed Feast, we remember the falling asleep of the Mother of God to the cares of this world. Her beloved Son came with the hosts of the heavenly powers to escort her pure soul into the heavenly habitations while her body was entrusted to the Holy Apostles for burial in a tomb before our Lord assumed it into the heavenly places.

Among the patristic writings on this feast, the following homily from St. Theodore the Studite, an Eastern Orthodox saint, is especially touching for its piety and ability to relate this feast to our daily devotion.

Excerpt from St. Theodore the Studite’s Homily on the Dormition of the Holy Theotokos

To do justice to the holy celebrations proclaimed for today, my friends, our words call for the sound of the trumpet, for the voice of the horn sounding out more loudly and echoing to the ends of the earth; yet I fear they must be borne by the weak instrument of our own voices. Still, the queen and mistress of the world cares little for honor, and may well accept our short, poor discourse, offered here in her service, as graciously as the long and splendid works of great orators. For she is moved by the prayers of those who have asked me to speak, since she values true goodness, after all, and looks only at our intentions.

But come, gather around me, everyone under heaven—all you hierarchs and priests, monks and people of the world, kings and rulers, men and women, young men and maidens, of all nations and tongues, of every race and every people—change your clothes for the robes of virtue, wrap yourselves in them as in “bright garments fringed with gold” [Psalm 44.13 LXX], and come with hearts rejoicing to celebrate the festival of the burial and the passing [into glory] of Mary, the Mother of the Lord. For she has gone away from here and draws near the eternal mountains, she who is the true Mount Sion, where God was pleased to dwell, as the Psalmist’s lyre sings [Psalm 131.14 LXX]. Today she who was heaven on earth is wrapped in a cloak of incorruptibility; she has moved to a better, more blessed dwelling-place. Today the spiritual moon, shining with the light of God, has come into heavenly conjunction with the “Sun of righteousness,” eclipsing her temporary home in this present life; rising anew in His home, she is radiant with the dignity of immortality. Today that ark of holiness, wrought with gold and divinely furnished, has been lifted up from her tabernacle on earth and is borne towards the Jersualem above, to unending rest; and David, the ancestor of God, poet as he is, strikes up a song for us and cries, “Virgins”—meaning souls—”will be led to the King”—to you, O God—”behind her” [Psalm 44.14 LXX].

Now the Mother of God shuts her material eyes, and opens her spiritual eyes towards us like great shining stars that will never set, to watch over us and to intercede before the face of God for the world’s protection. Now those lips, moved by God’s grace to articulate sounds, grow silent, but she opens her [spiritual] mouth to intercede eternally for all of her race. Now she lowers those bodily hands that once bore God, only to raise them, in incorruptible form, in prayer to the Lord on behalf of all creation. At this moment her natural form, radiant as the sun, is hidden; yet her light shines through her painted image, and she offers it to the people for the life-giving kiss of relative veneration, even if the heretics are unwilling. The holy dove has flown to her home above, yet she does not cease to protect those below; departing from her body, she is with us in spirit; gathered up to heaven, she banishes demons by her intercession with the Lord.

Long ago, death took charge of the world through our ancestor Eve; but now it has engaged in combat with her blessed daughter and been beaten away, conquered by the very source from whom it had received its power. Let the race of women rejoice, then, for it has received glory in place of shame! Let Eve be glad, for she is under a curse no more, having produced in Mary a child of blessing. Let the whole of creation jump for joy, drinking the mystical flood of incorruption from that virgin spring and putting an end to its mortal thirst. These are the things we celebrate today, this is the subject of our solemn song: Mary provides it for us—the root of Jesse who bore the flower Christ; the rod of Aaron with its sacred bud; the spiritual Paradise containing the tree of life; the meadow alive with the fragrance of virginity; the blooming vine, cultivated by God, which became the ripe grape flowing with life, the high, exalted cherubim-throne of the universal king; the home full of the glory of the Lord; the sacred veil of Christ; the bright land of sunrise. She has fallen asleep in peace and righteousness—fallen asleep, I say, but she is not dead! She has passed on from us, yet she does not cease to protect her people.

From the Encomium on the Dormition of Our Holy Lady, the Mother of God, by Saint Theodore the Studite