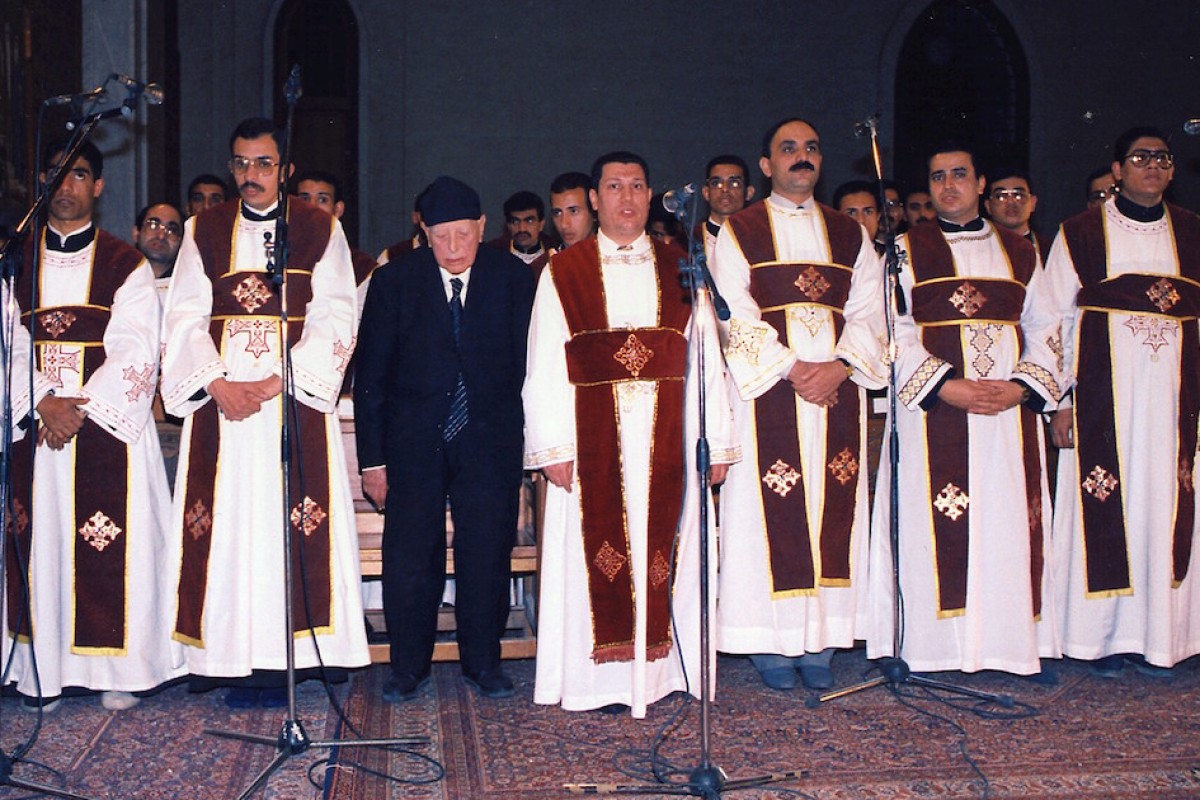 The Divine Liturgy is the most important activity in our Orthodox Christian lives. It is the time when the people of God, the ekklesia, stand before Him in reverence, worship Him and entreat His mercy, and receive Communion with Him for the forgiveness of sins and eternal life. Because of its importance, any changes to the Divine Liturgy must be studied with caution.

I feel we are at the cusp of such a change relating to the responses of the deacons who serve the Holy Altar during the Divine Liturgy. Much has already been written concerning the ever-changing role of deacons in the Coptic Orthodox Church. There is an excellent collection of articles written anonymously by a Canadian Copt on the subject.

For the purpose of this post, however, I would like to focus on what seems to be the growing and conscious elimination of the deacons’ responses in the Litanies. For those unfamiliar with this terminology, consider the following example from the Coptic Divine Liturgy of St. Basil the Great.

PRIEST:
Remember, O Lord, the peace of Your One, Only, Holy, Catholic, and Apostolic Church.

DEACON:
Pray for the peace of the One, Only, Holy, Catholic, and Apostolic Orthodox Church of God.

As we can see, this one litany contains responses for the priest, deacon (i.e., the one serving at the Holy Altar), and the people. The litany has been written this way for centuries, but only in modern times, we find many parishes completely skipping the deacons’ responses, not only during “faster” Divine Liturgies on weekdays, but even during Sunday and festive Divine Liturgies, too.

The Arguments in Favor of Skipping the Deacons’ Responses

Some people argue that skipping the deacons’ responses is necessary for time management, the idea that the Divine Liturgy must strictly follow a schedule and end at a specific time to meet the expectations of the people.

Is this a viable argument?

While I certainly appreciate the need to be reasonable in the timing of the Divine Liturgy, I don’t think the answer is skipping the deacons’ responses, because they really don’t take much time at all. In the Divine Liturgy of St. Basil, we have Seven Minor Litanies that are recited after the Epiclesis, or consecration of the Mysteries. If each response took 30 seconds to chant (and that is being generous considering most of these responses are short), then it will take a total 3.5 minutes for all of the deacons’ responses. What is 3.5 minutes in a service that lasts almost 3 hours?

Perhaps the problem lies in the fact that many of the deacons who serve the Holy Altar these days are young boys and men with almost no training whatsoever. I commend them for doing their best to respond well, but more often than not, they stumble through their responses in a distracting manner. Perhaps this is why people wish to skip the responses altogether: they are rarely chanted well these days. But this is the classic causality dilemma (i.e., chicken and egg problem): if more deacons were encouraged to pray their responses, they would similarly be encouraged to learn them well so that they might pray them beautifully and in a timely manner.

In any event, I don’t see time management as being a viable argument for skipping the deacons’ responses.

There are others who justify skipping the deacons’ responses because, in their mind, the deacons are simply repeating what the priest is saying. “What’s the point of asking God to remember the peace of the Church twice in a row?”

I find this argument lacking, because, if there is indeed blind repetition, how can we understand the fact that the Holy Spirit, Who worked through the Fathers of the Church, preserved these responses in our books for centuries? Obviously, these responses were written and handed down from generation to generation. We cannot assume that we are the only enlightened generation that has noticed repetition here.

Moreover, although some responses (like that for the peace of the Church) seem to be repetitive, the reality is that the deacon oftentimes commands the people to pray for more than the priest has mentioned. Consider the following example.

PRIEST:
Remember, O Lord, the Orthodox hegumens and presbyters, and the deacons.

DEACON:
Pray for the hegumens, presbyters, deacons, and the seven orders of the Church of God (emphasis supplied).

The difference between what the priest and deacon said is the mention of the “seven orders of the Church of God.” In the Canons of the Church, these seven orders refer to the bishop, presbyter, deacon, subdeacon, reader (oghnostos), chanters (psaltos), and the doorkeepers or the entire congregation depending on the source. 1 Canon 10 of Pseudo-Athanasius compares these seven ranks to the Seven Eyes of God as mentioned in Zechariah (3:9, 4:10), the Seven Pillars of Wisdom as mentioned in Proverbs (9:1), and the Seven Spirits as mentioned in Revelation (5:6). The deacon clearly is bringing our minds to ranks that the priest did not mention. His response is not merely repetition, but rather, a restatement and an expansion.

We cannot, therefore, justify skipping the deacons’ responses simply because they are repetitive. Yes, they are similar, but not repetitive to the point of obsolescence.

The real issue here is deeper than time management and repetition. The real issue is the liturgical role of deacons generally. Today, we oftentimes see young chanters (Psaltos) serving the Holy Altar in place of mature men who received the grace of ordination as deacons. One cannot deny there is a significant difference between a young man in junior high school and a mature man who consecrated his entire life to the service, like a bishop or presbyter. The fact that we now have the former performing the exact liturgical responsibilities of the latter says much about our view of the liturgical role of deacons.

And what exactly is that role?

The deacon is considered to be a herald in the Divine Liturgy, as St. John Chrysostomos mentioned, 2 one who cries out and exhorts the people to pray for specific things. One of the most common responses in the Coptic rite, “Stand up to pray,” reminds us of this unique function of the deacon. He is the one who commands us to stand up, face the East, attend, worship with fear and reverence, and generally, to pray. So important is his role liturgically that he begins for us the proclamation of the Symbol of Faith, the Creed, when he commands us, “In wisdom of God, let us attend. Lord have mercy, Lord have mercy. Truly…” His last word, “Truly,” is the first word of the Creed that we begin to proclaim.

When it comes to the Litanies, the subject of this meditation, the deacon has the privilege and duty to exhort people to pray for the things the priest has mentioned and oftentimes even more than the priest mentioned. It is part of the beautiful drama of the Divine Liturgy in which the priest makes his request to God, the deacon commands the people to share in that request, and the people proclaim ‘Lord have mercy’ while praying for that request. Metropolitan John (Zizioulas) of Pergamon described the Divine Liturgy as a drama in which “everyone and everything is an image of something.” 3 Later, he writes that “the deacons represent the angels who, as ‘ministering spirits sent forth to serve’ (Heb. 1:14), move between the people and the clergy.”

When we skip the deacons’ responses, we break this beautiful drama as it was handed down and erode the role of the deacon in the Church generally.

As I see it, however, if we accept the necessity of deacons serving in the Holy Altar today (and we certainly do in the modern Coptic Orthodox Church in which it is inconceivable for a priest to serve at the Holy Altar alone), then we should allow them to pray their responses. We should allow whoever is in the Holy Altar to fulfill their role in the beautiful drama of the Divine Liturgy in which everyone, including deacons, have a heavenly image to reflect.

We should let the deacons respond.

27 Responses to "Let the Deacons Respond!"