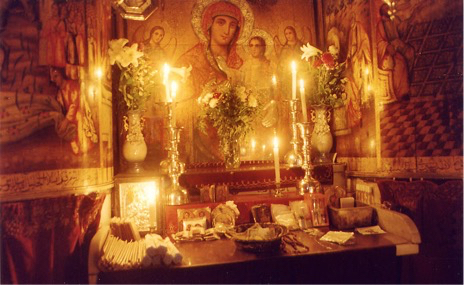 While reading a wonderful book entitled The Practice of the Presence of God by Brother Lawrence of the Resurrection, a 17th c. spiritual classic, I happened upon the following quote from the Introduction by Doris Day:

We have to leap into faith through the senses — from the natural to the supernatural — and I was drawn to the Church in my youth because it appealed to the senses. The music speaking to the ear, the incense to the sense of smell, the appeal of color to the eye, stained glass, ikons and statues, the bread and wine to the taste, the touch of rich vestments and altar linens, the touch of holy water, oils, the sign of the cross, the beating of the breast.

This passage very much reflects our Orthodox spirituality, which can perhaps be described as an assault on the senses. How many of us have felt the presence of God in Orthodox worship simply from the heavenly atmosphere of the church — the beauty of the holy icons, the sweet-smelling incense, and the deeply inspiring hymns that reflect the Nature of God in their harmony?

An Antiochian Orthodox priest once related to me the story of an American businessman who happened upon an Orthodox Christian church in Japan of all places. He himself was not an Orthodox Christian, but nonetheless, he decided to enter this parish and observe the Divine services that were taking place. At the end of the service, he remarked, “I didn’t understand anything, but God was here.” What a beautiful reality! Transcendental beauty is real, and the human soul has an innate capacity of recognizing it so long as we open our hearts and senses to it.

Sadly, however, our modern 21st century lives oftentimes get in the way of experiencing this transcendental beauty in our Orthodox worship. In the Coptic Orthodox Church, for example, there is an unfortunate growing trend of speeding up the Divine Liturgy by cutting out the hymns and even the responses of the deacon serving the Holy Table. People sometimes even see the Divine Liturgy as a mere formality that has to be completed as quickly as possible before they can come and approach the Mysteries.

These ideas, of course, are incompatible with the nature of the Divine Liturgy as being “heaven on earth.” We come to the Divine Liturgy not simply to “get it over with,” but rather, to spend three hours on Sunday morning experiencing the eternal life. One cannot read the Book of Revelation and its description of the eschaton, the eternal life with Christ, without recognizing its inherently liturgical character. Consider, for example, the following passage:

And I beheld, and, lo, in the midst of the throne and of the four beasts, and in the midst of the elders, stood a Lamb as it had been slain, having seven horns and seven eyes, which are the seven Spirits of God sent forth into all the earth. And he came and took the book out of the right hand of him that sat upon the throne. And when he had taken the book, the four beasts and four and twenty elders fell down before the Lamb, having every one of them harps, and golden vials full of odours, which are the prayers of saints. (Re 5:6–8).

In this passage, we have a Lamb Who is worshipped by the holy luminaries and the twenty-four presbyters with music and golden vials of incense. Does that sound familiar? It is what we do every time we celebrate the Divine Liturgy.

As Fr. Matthew the Poor (Matta al-Maskeen), the late Hegumen of the Monastery of Abba Makarios in Shiheet explains,

He continues with an important message for all of us:

The Book of Revelation stands as an eternal witness to the spirituality of all the principles and types of liturgy and sets an eternal seal on its prayers, its praises, its incense, and its sacrifice. It declares and bears witness that the traditions of prayer, praise and service given by Christ to the disciples, and the order and system received by the holy apostles under the inspiration of the Holy Spirit, are eternal and not subject to time. They are based not on symbols, but on realities, which we shall continue to live even in the next life, when each of us will take his rightful place around the divine throne and be taught the mystery of angelic praise, so that we may serve the same liturgy, perhaps even in the same words, but in indescribable glory.

In light of this, we need to strive more to appreciate exactly what we are doing every time we gather to celebrate the Divine Liturgy. It is not a formality. It should not be shortened or abbreviated under any circumstances. We best serve ourselves and our children by teaching them to stand reverently throughout the Divine services so that they, too, may experience the transcendental beauty of Orthodox worship.

Yes, it will be hard and it will take time, but the reward will be eternal.

A day after writing this post, I read the following excerpt from an interview with the Greek Orthodox Metropolitan Hierotheos of Nafpaktos:

[,,,]I have studied the Apocalypse of Saint John the Theologian for many years and many times have made an interpretive analysis in my homilies to people. Over time I discovered two points.

First, everything John the Evangelist saw he recorded in the Apocalypse which greatly influenced the liturgical and worship practices of the Church, as well as iconography and ecclesiastical art in general, such as the synthronon, the Holy Altar with its relics of martyrs, psalmody, etc.

Second, what John the Evangelist saw was heavenly worship, a heavenly Divine Liturgy, where He Who sits on the throne, the “slain Lamb”, is praised with hymns by the presbyters, living beings, the angels, the martyrs and the venerable ones. The whole narrative of the Apocalypse shows a sketch of the heavenly Liturgy and what is outside of it, namely the paraliturgy. In the Divine Liturgy the Lamb is praised with hymns by His friends, and the paraliturgy is dominated by the Beast and his followers. The final outcome is the victory of the Lamb over the Beast, and those who are connected with Christ from now partake of the heavenly Divine Liturgy, which is the first resurrection, and they proceed to the second resurrection which is the mystical marriage with the Lamb, the new creation, the new Jerusalem.

However, when one reads the Apocalypse carefully within this perspective, they will see that this is a sacred book that has affected the provision of the Divine Liturgy that takes place in sacred churches, and they will find that the Divine Liturgy is a “gathering of heaven and earth”, the heavenly and the earthly, the living and reposed.

It is truly amazing to see the work of the Holy Spirit in the fact that Fr. Matthew the Poor and Metropolitan Hierotheos focus on the same aspect of the Book of Revelation as a liturgical book.

One Response to "Orthodox Worship and the Senses"