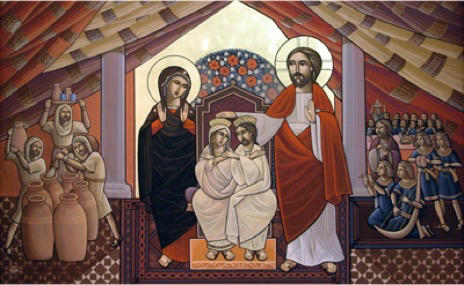 On the joyful day a man and woman are crowned and married in the Orthodox Church, an inseparable bond develops between them. No longer are they two individuals serving their own egos and self-wills, but rather, they become one flesh in a sublime mystery. This reality is made abundantly clear in the marriage of the first husband and wife described at the end of Genesis 2. When Adam awoke from the deep sleep into which the Lord God induced him, he beheld for the first time his wife — the woman God made from and for him — and uttered this beautiful prophecy:

This now is bone of my bones, and flesh of my flesh; she shall be called woman, because she was taken out of her husband. Therefore shall a man leave his father and his mother and shall cleave to his wife, and they two shall be one flesh (Ge 2:23–24 LXX). 1

From the time our forefather Adam uttered this prophecy until now, our understanding of marriage as the mystery of two becoming one flesh remains.

The Holy Fathers of the Church spoke about this one-flesh unity in many homilies and orations. Perhaps the most beautiful words come from the Golden Mouth, the Holy John Chrysostomos, who described the one-flesh unity in the following passage,

They come to be made into one body. See the mystery of love! If the two do not become one, they cannot increase; they can increase only by decreasing! How great is the strength of unity! God’s ingenuity in the beginning divided one flesh into two; but he wanted to show that it remained one even after its division, so He made it impossible for either half to procreate without the other. Now do you see how great a mystery marriage is! 2

The holy saint reminds us that, through this one-flesh mystery — when each spouse yields his/her ego and self-will in order to submit to the other — a married couple grows in virtue and increases by having blessed children.

In the context of their marriage, a husband and wife become one flesh, not only with each other and with their children, but also with God Himself. As they strive together for holiness and the attainment of the Kingdom of God, they strengthen their bond with God and with one another. For this reason, in the older rite of the Crowning service, which has sadly been abandoned by most couples, the married couple’s first action together is to receive Holy Communion. In the Coptic Orthodox Church, they are given one silk veil with which to receive the Body and Blood of Christ together as a symbol of their union with God and with each other. Just as our Savior united His Divinity with our humanity for the sake of our salvation, so also do a husband and wife unite in a one-flesh unity for the sake of uniting with Him. This, then, is the great and awesome mystery of marriage — two individuals are united into one flesh through the invisible grace and work of the Holy Spirit for their salvation. Everything done before the marriage stems from the individual’s ego and self-will, but everything done after the marriage stems from the one-flesh unity for the salvation of the family.

The Orthodox Christian husband understands this reality and places it before his eyes in everything he does as a husband. Every interaction with his wife should in some way relate to that one-flesh unity that brings about union with God and salvation. In addition, he sees his wife through the lens of this one-flesh unity — she is a gift from God, a helper, who will unite with him in this sublime mystery.

Accordingly, a husband must continually thank God for his wife. Too often, modern husbands see their wives as little more than hired help, or worse, someone with whom to enjoy the passions, but this is not the reality. A wife is the crown of her husband in this world as the Holy Prophet-King Solomon wrote, “A virtuous woman is a crown to her husband; but as a worm in wood, so a bad woman destroys her husband.” (Pr 12:4). This crown is given to a husband by God Himself: “House and riches are the inheritance of fathers: And a prudent wife is from the LORD” (Pr 19:14). To understand exactly what a prudent wife is, we may consider this passage from Oration 8 of the Holy Gregory the Theologian:

The divinely inspired Solomon in his instructive wisdom…praises the woman who keeps her house and loves her husband…he praises her who is engaged honorably at home, who performs her womanly duties with fearless courage, her hands constantly holding the spindle as she prepares double cloaks for her husband, who buys a field in season, and carefully provides food for her servants, and receives her friends at a bountiful table, and who exhibits all other qualities for which he extols in song the modest and industrious woman. 3

Of course, many of these activities will seem archaic to the modern reader. Very few of us might remember what a spindle is. The important things are the virtuous characteristics of the good wife described in this passage — the qualities of being loving, honorable, courageous, industrious, charitable, and hospitable — which are timeless. A man who finds a wife with these qualities is blessed despite his own imperfections, according to Eusebius of Caesarea:

“Your wife like a fruitful vine” (Ps 127:3) This is given to him who, though still imperfect, fears the Lord, but it does not hold for one who loves him with all his soul, all his heart and all his strength. For him, there are “those things that eye has not seen,” etc. (1 Cor 2:9). To one who fears the Lord is given a consort of whom it is said, “A good wife is good fate” and “A strong woman, who can find her?” (Pr 31:10). She is more precious than the most costly stones (Pr 3:15). An evil consort is wrath that comes from God. 4

If a man observes these virtues in his wife, he should recognize this blessing from God and thank God for her daily, understanding that she is his helper in the path towards eternal salvation.

But what if the husband doesn’t see his wife as virtuous? What if he doesn’t see these virtuous characteristics in his wife? From my experience, he oftentimes bears at least some of the blame, because he was not a good example to her. When things did not go well, he took to criticizing his wife, abusing her, comparing her with others, and failing in his responsibility to encourage her. All hope is not lost in such a marriage, however, because a husband, by his struggle and the grace of God, can change himself. He can compel himself to repent and change his life so that his wife may learn virtue from him. He can thank God for giving him the chance to encourage his wife in the acquisition of virtue.

If a husband focuses on the mystery of the one-flesh unity and its goal of eternal life, then he will see and treat his wife in the right way.

6 Responses to "How a Faithful Husband Sees His Wife"