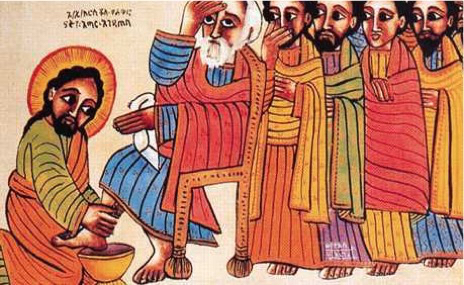 Would you do honor to Christ’s Body? Neglect Him not when naked; do not while here thou honorest Him with silken garments, neglect Him perishing without of cold and nakedness. For He that said, “This is my body,” and by His word confirmed the fact, his same said, “Ye saw me an hungered, and fed me not;” and, “Inasmuch as ye did it not to one of the least of these, ye did it not to me.” For This indeed needs not coverings, but a pure soul; but that requires much attention.

Let us learn therefore to be strict in life, and to honor Christ as He Himself desires. For to Him who is honored that honor is most pleasing, which it is His own will to have, not that which we account best. Since Peter too thought to honor Him by forbidding Him to wash his feet, but his doing so was not an honor, but the contrary.

Even so do you honor Him with this honor, which He ordained, spending thy wealth on poor people. Since God hath no need at all of golden vessels, but of golden souls.

And these things I say, not forbidding such offerings to be provided; but requiring you, together with them, and before them, to give alms. For He accepts indeed the former, but much more the latter. For in the one the offerer alone is profited, but in the other the receiver also. Here the act seems to be a ground even of ostentation; but there all is mercifulness, and love to man.

For what is the profit, when His table indeed is full of golden cups, but He perishes with hunger? First fill Him, being an hungered, and then abundantly deck out His table also. Dost thou make Him a cup of gold, while thou givest Him not a cup of cold water? And what is the profit? Dost thou furnish His table with cloths bespangled with gold, while to Himself thou affordest not even the necessary covering? And what good comes of it? For tell me, should you see one at a loss for necessary food, and omit appeasing his hunger, while you first overlaid his table with silver; would he indeed thank thee, and not rather be indignant? What, again, if seeing one wrapped in rags, and stiff with cold, thou shouldest neglect giving him a garment, and build golden columns, saying, â€œthou wert doing it to his honor,â€ would he not say that thou wert mocking, and account it an insult, and that the most extreme?

Let this then be thy thought with regard to Christ also, when He is going about a wanderer, and a stranger, needing a roof to cover Him; and thou, neglecting to receive Him, deckest out a pavement, and walls, and capitals of columns, and hangest up silver chains by means of lamps, but Himself bound in prison thou wilt not even look upon. MMAnd these things I say, not forbidding munificence in these matters, but admonishing you to do those other works together with these, or rather even before these. Because for not having done these no one was ever blamed, but for those, hell is threatened, and unquenchable fire, and the punishment with evil spirits. Do not therefore while adorning His house overlook thy brother in distress, for he is more properly a temple than the other.

And whereas these thy stores will be subject to alienations both by unbelieving kings, and tyrants, and robbers; whatever thou mayest do for thy brother, being hungry, and a stranger, and naked, not even the devil will be able to despoil, but it will be laid up in an inviolable treasure.

___________
John Chrysostom, “Homilies of St. John Chrysostom, Archbishop of Constantinople on the Gospel according to St. Matthew,” in Saint Chrysostom: Homilies on the Gospel of Saint Matthew, ed. Philip Schaff, trans. George Prevost and M. B. Riddle, vol. 10, A Select Library of the Nicene and Post-Nicene Fathers of the Christian Church, First Series (New York: Christian Literature Company, 1888), 313–314.