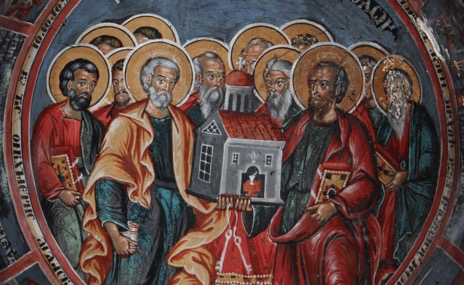 Our Lord Jesus Christ spent the night in prayer, conversing with His Father and God in heaven in a way indescribable and beyond our powers of understanding, a way which is solely known to Himself. He thus makes Himself an example to us of that which is necessary for salvation, for He taught us in what way we too may rightly and blamelessly offer our prayers. He then came down from the mountain, and appointed those who were to be the world’s teachers, according to the words He spoke, “You are the light of the world.” (Matt. 5: 14) Of this appointment of the holy Apostles, the blessed David also makes mention addressing himself, as it were to Christ, “You shall make them princes in all the earth; I will make Your name to be remembered in every generation.” (Ps. 45:16) For truly, while they were in the body, they make mention of the glory of Christ, telling His mystery both in cities and villages. Now that they have been called to the mansions that are above, they still converse with us about Him, by the most wise history which they have written concerning Him.

Gifts Given to the Apostles

Indeed, those who were appointed priests according to the law of Moses, even Aaron and his company, were made beautiful to the senses by vestments suitable to their priestly dignity. But the divine disciples, being adorned with spiritual gifts, had entrusted to them the ministry of the Gospel oracles. For it was said to them, “Heal the sick, cleanse the lepers, raise the dead, cast out demons.” (Matt. 10:8) Being thus invested with Christ’s power, they filled the whole world with astonishment. But notice the extreme moderation of the Evangelist. He does not simply say that the holy Apostles were appointed, but rather, by introducing the record of these chief ones each by name, takes care that no one should venture to enroll himself in the company of those that were chosen. For as Paul said, “No man takes this honor to himself, but he who is called by God.” (Heb. 5: 4) Though the holy Apostles were called by name to this great and splendid dignity, yet from time to time, some men have gone to such a pitch of madness and audacity, as even to name themselves Apostles of Christ, and to seize an honor not granted unto them. Of these the divine disciples made mention, for they said, “For such are false apostles, deceitful workers, transforming themselves into apostles of Christ. And no wonder; for Satan even transforms himself into an angel of light. Therefore it is no great thing if his ministers also transform themselves into ministers of righteousness.” (2 Cor. 11: 13-14) However, we neither acknowledge nor will receive any one, except those only so named in the Evangelic writings, and also the one who was appointed after them, the most wise Paul. The Savior Himself bore witness to him saying, “He is a vessel of Mine, to bear My name before all the gentiles.” (Acts 9: 15)

Symbols of the Holy Apostles

The law pointed them out before in type, and the prophets also proclaimed them. As for instance, it is written in the Mosaic record, “And you shall take fine flour, and bake twelve cakes with it; and you shall set them in two rows, six in a row, on the pure gold table before the Lord. And you shall put pure frankincense on each row, that it may be on the bread for a memorial.” (Lev. 24: 5-6) Who else can be the bread that came down form heaven and gives life to the world, except Christ, the Savior of the universe? In a similar manner the blessed disciples also are named loaves. Having been made partakers of Him, Who nourishes us unto life eternal, they also nourish by their own writings those who hunger and thirst after righteousness. As the Savior is the true light, He also called His disciples, “You are the light of the world.”(Matt. 5: 14) Also being Himself the bread of life, He has bestowed upon His disciples to be ranked as loaves. Please, observe the marvelous art of the law: for you shall put, it says, upon the loaves of frankincense and salt. Now the frankincense is the symbol of a sweet odor; and the salt that of understanding and good sense. Both of them existed in the highest degree in the holy Apostles. Their life was one of a sweet savor, as they also said, “For we are to God the fragrance of Christ.” (2 Cor. 2: 15) More over, they were also full of understanding, so that the prophet David sang of them in the Psalms, “There is Benjamin, their leader, the princes of Judah and their company, the princes of Zebulun and the princes of Naphtali.” (Ps.68: 27) The blessed disciples were chosen out of almost every tribe of Israel, and were the bearers of light to the world, holding up the word of life. Indeed, the wonder is that the sages of the Greeks possessed eloquent speech, and an admirable beauty of language, but the disciples of our Savior were mere artificers (skilled craftsmen), boatmen, and fishermen, having no boast of words and no fluency of picked phrases. In expression they were indeed simple men, but rich in knowledge. The literature of the Greeks, with it eloquent phrases, is silent, while the power of the Evangelic preaching has possession of the world. God also make mention of them by the voice of Jeremiah, say of the enemy of all, Satan, “Woe to him who increases. What is not his-how long? And to him who loads himself with many pledges? Will not you creditors rise up suddenly? Will they not awaken who oppress you? And you will become their booty.” (Hab. 2: 6-7) Satan gathered unto him all the inhabitants of the earth, though they were not his, and had caused them to be his worshippers, making his collar heavy. But those who were to plunder his goods woke up; for the net of the apostolic teaching caught all those that were in error, and brought back unto God the whole world.