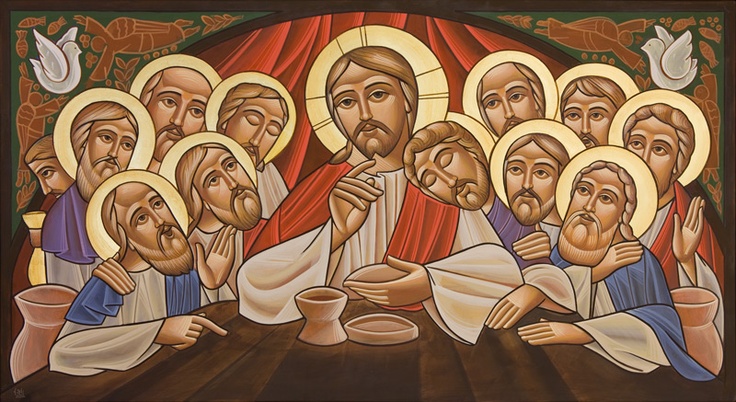 To confirm the certainty of His presence He revealed to them the mystery of the broken bread and the shed blood through His words: “For as often as you eat this bread (transformed) and drink the cup (transformed,) you proclaim the Lord’s death until He comes” (1 Corinthians 11:26.) When you eat of the bread, you eat it as His body slaughtered and sanctified through the mystery. The mystery of the crucifixion and the tomb were incorporated in the Last Supper. Christ died in order to be resurrection, so t he proclamation of His death thus becomes also a confession of His resurrection.

Through this mysterious act, His disciples evoke the living Lord by means of His wounds of crucifixion. It is nothing less than His living presence ebing among them in nthe condition of permanent resurrection, still bearing His wounds. It is equivalent to create a living memory of His invisible presence, not merely in thought, as if we were remembering Christ who has died and gone, but a remembrance of Christ’s ever-living presence. The Eucharist thus became an invocation of the Lord’s presence, both slaughtered and present in an invisible condition, by means of the bread eaten and the wine drunk, that goes beyond natural reasoning. This is indeed the true bread the true drink, there being no other truth than Christ. The Eucharist is indeed therefore considered the food of the Lord, in accordance with His words: “So he who eats me will live because of me” (John 6:57.)

Remembrance leads to a living communion in Christ to fulfill the mystery of this extraordinary union: “In that day, you will know that I am in my Father, and you in Me, and I in you” (John 14:20.) “He who eats My flesh and drinks My blood abides in me, and I in him” (John 6:56) and “has eternal life, and I will raise him up at the last day” (John 6:54.)

The remembrance of Christ in celebrating the Eucharist is the remembrance of His presence. It is not just a fleeting remembrance, but it is truly the mystery of participating in the life and resurrection of the Lord that will be fully revealed at the resurrection when we will see Him as He is, and find ourselves in Him: “We know that when He appaears, we shall be like Him, for we shall see Him as He is” (1 John 3:2.) THe words “we shall be like Him” are mysterious words with deep meaning and of great importance, because they imply a communion between Him and us both.

His words “and remember me till I come” means until my presence is revealed visibly among you, on the day when renewed man will attain imortality and see the invisible clearly. For now, live in commemoration, because the new man is hindered from visibly witnessing the Lord’s glory, although it sometimes occurs that a new man’s perception becomes alert to witness the Lord’s existence and words.

This proves to us that He is both present and concealed. His words, “till I come,” are due to our not realizing His presence. In the early church, after completing the Eucharist, the congregation and priest would cry out, “Maranatha!”, meaning, “Come Lord Jesus, and may the world end!” This came from their intense longing to see the Lord present in their midst in accordance with His promise: “For where two or three are gathered in my name, t here am I in the midst of them” (Matthew 18:20.)

Concerning His flesh, He said, “For I tell you I shall not eat it until it is fulfilled in the kingdom of God” (Luke 22:16,) and concerning the blood, He said, “Truly, I say to you, I shall not drink again of the fruit of the vine until that day when I drink it new in the kingdom of God” (Matthew 14:25.) The words “that day” mean now and at the present. From the Lord Himself we know that in the heavenly kingdom there is no eating or drinking, but the meaning is stronger and simpler: He will eat it with us here when He has entered His kingdom and will drink it iwith us here on earth while He is present in His kingdom; this is a mystery. In accordance with the deacon’s loud proclamation, we know that Christ is present at the time the offering is raised, sharing it with us as He did with His disciples during the Last Supper on that Thursday.

As for how he can eat and drink with us here whilst being resurrected in glory, the answer is as He Himself explained, “‘See my hands and my feet, that it is I myself; handle me, and see, for a spirit has not flesh and bones as you see that I have.’ And while they were still in joyful amazement and wonder, even disbelief, He said to His disciples, ‘Have you anything here to eat?’ They gave Him a piece of broiled fish, and He took it and ate before them” (Luke 24:40-43.)

It is therefore easy to understand that Christ’s presence is really participating in the Eucharist. The Eucharist primarily derives its sanctity, awe, and truth from the Last Supper.

In the Liturgy of Saint Basil, during the holy embrace section (“Aspasmos,”) the prayer says:

Come to us this day Lord Jesus and illuminate us with Your elevated divinity.

Also, in the same place during the Liturgy of Saint Cyril, the congregation utters the following:

Emmanuel is amongst us now in the glory of His Father and of the Holy Spirit to bless us all, purify our hearts, and heal the diseases of our souls and bodies. We kneel before You, O Christ.

In the Deacon’s Service book, the following annual hymn is chanted:

We look at you every day on the altar and we partake of Your precious body and blood, etc.

The Eucharist is a true Divine presence sanctified by Christ Himself, establishing His mystery in it. It is He who gives both the bread and the wine of the Communion with His invisible hand. Christ kept His promise and did not share in any Eucharist until after His resurrection. The disciples revealed His communion with them in eating and drinking with the words “God raised Him on the third day and made Him manifest; not to all the people, but to us who were chosen by God as witnesses, who ate and drank with Him after He rose from the dead” (Acts 10:40,41.)

At His coming He will reveal the great principles and truths of the mystery we fulfilled in His name and memory, and He will place wreaths on those who remembered Him well.