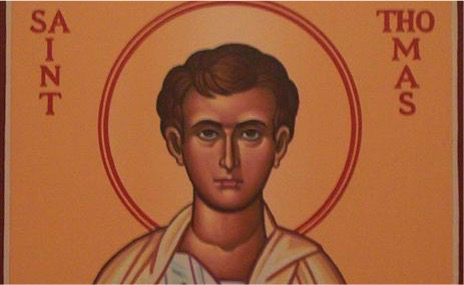 In light of the Feast of the Holy Apostle Thomas, which we celebrate today, we offer this beautiful story of how Thomas began to bring many Indians to the knowledge of God. It comes from the First Book of the Evergetinos.

The great Apostle Thomas was placed by the Lord in the service of a businessman, Abban, as one very able in the art of construction. Together with the businessman Abban, St. Thomas arrived in the land of India. There he was led before the king of the land. The king asked him, with interest, about his skills, and the Apostle Thomas assured him that he was among the most accomplished builders and demonstrated to him adequately his skills in this art.

Indeed, from all that he said about his art, St. Thomas was reckoned by all those hearing him to be a remarkable architect, for which reason the king entrusted him with a plentiful amount of money to build him a palace in a certain part of his kingdom.

No sooner had the Apostle Thomas received the king’s money, plentiful as it was, than he distributed all of it to the poor and to all who were in need.

After a short time, the king sent emissaries to the place which he had indicated that his palace be built, so as to see the construction. He was astonished, however, to learn from his emissaries, when they returned, that Thomas had not even laid the foundations for the building and that all of the money that the king had entrusted to him had been distributed among the poor. The king then became furious and commanded that the Apostle be tied up, hands behind his back, and brought before him.

Quicker than he could say it, the king’s command was fulfilled and the Apostle Thomas was brought before him. The king said to him with uncontrollable anger: “Did you finish my palace?”

“Yes,” the Apostle Thomas quietly answered him, “and a very beautiful one.”

“It is not possible in the present life, O king, to see the castle which I am preparing for you. At your departure from this world, however, you will see it, and you will enjoy it with great happiness and rejoicing,” the Apostle responded.

These words of the Apostle Thomas, King Gundaphor (that was his name)­ considered deceitful, and did not believe them to be true.

In the meantime, he was told that the Apostle Thomas was poor and had nothing that he could confiscate. Having thus lost any hope that he could get his money back, he decided, under the influence of his rage, that only the death of the Apostle Thomas would satisfy his anger. So, he arranged to have the Apostle skinned alive and afterwards thrown into a fire to be burned. But He who brings about all things by His omnipotence and calls them into accord with His Divine Will conveniently arranged for a change in the course of events through a fatal blow to Gad, who was the brother of King Gundaphor. And behold what happened. This Gad was even more upset than his brother the king at St. Thomas’ failure to build their palace; and being more greatly infuriated by the Apostle, who had supposedly swindled them, he encouraged the king to proceed with Thomas’ punishment. In the interim, however, Gad died.

The death of Gad, however, prompted the postponement of the Apostle Thomas’ death. Owing to the magnitude of the calamity of Gad’s death, the king forgot about his condemnation of St. Thomas and busied himself with the funeral arrangements for the dead Gad.

But what an astonishing miracle God performed — He Who wishes not the death of a sinner, but that he should turn from his sin and live the life of virtue.

As soon as Gad died, Angels took his soul and showed him the everlasting abodes that exist in the other world for those who are saved from sin. Gad’s soul was so overwhelmed by the beauty, the magnitude, and the extraordinary brightness of one of these heavenly mansions, that he set aside all else and persistently pleaded with his Angelic guides to let him live in just one of the smallest of the rooms in the mansion.

The Angelic guides, however, would not consent to his request, pointing out that the mansion belonged to his brother Gundaphor, and that it had been built by someone from a foreign place by the name of Thomas.

Upon hearing this, Gad began with even greater zeal to implore his Angelic guides to go back and return to the world, so that he could buy this dazzling castle from his brother.

And what should happen thereupon?

At the beckoning of Him Who orders all things, it was appointed that Gad’s soul should return to his dead body, not only to save the Apostle from death, but to save many souls with the miracle of the dead Gad’s resurrection.

Now, those who were caring for his burial, while wrapping Gad’s dead body in funeral linens, suddenly saw the soulless body begin, little by little, to come to life. Amazed, they immediately ran to King Gundaphor to relate to him this unheard-of event.

Astonished, the king hastily ran to the side of his dead brother. And, oh, the wonder! Gad, up to this time dead, opened his lips, which had been sealed by death, and, as though waking up from sleep, insistently began to plead with his brother, saying, “If you love me, my brother, fulfill my request to buy the beautiful palace which Thomas the Christian has built for you in Heaven.”

Carefully listening to these words, the king well understood their meaning and recognized that the Apostle Thomas was in fact an Apostle of God and that the God Whom the Apostle Thomas proclaimed was indeed a true God and a lover of man; forthwith his soul was enlightened with the brilliance of faith, and he answered his brother: “My brother, I cannot sell you that building, the acquisition of which did not come so easily. Rather, I believe it easier to take the building for myself and to introduce you to the architect who made it — who by Divine Providence is still alive — and he can make a similar castle on your behalf.”

Immediately the king commanded that Thomas be brought before him, who in the meantime was freed from prison and from his fetters. When the Apostle appeared, both of the two brothers fell at his feet and asked forgiveness for the wrong which they had brought upon him — albeit out of ignorance — and asked him to preach in their country the God Whom they knew not and His commandments, that they might live all of their lives in accord with His Will and thus merit the eternal and un­ seen good things, the images and types of which Gad had, indeed, been deemed worthy to foresee.

The Apostle Thomas heard all of this with amazement and marveled at the depth of God’s Providence; immediately, then, he suitably thanked God and catechized them. Thereafter, he baptized all of them in the Name of the Father and of the Son and of the Holy Spirit. He also baptized other numberless throngs of Indians, who came to believe in God on account of the miracle which had taken place.