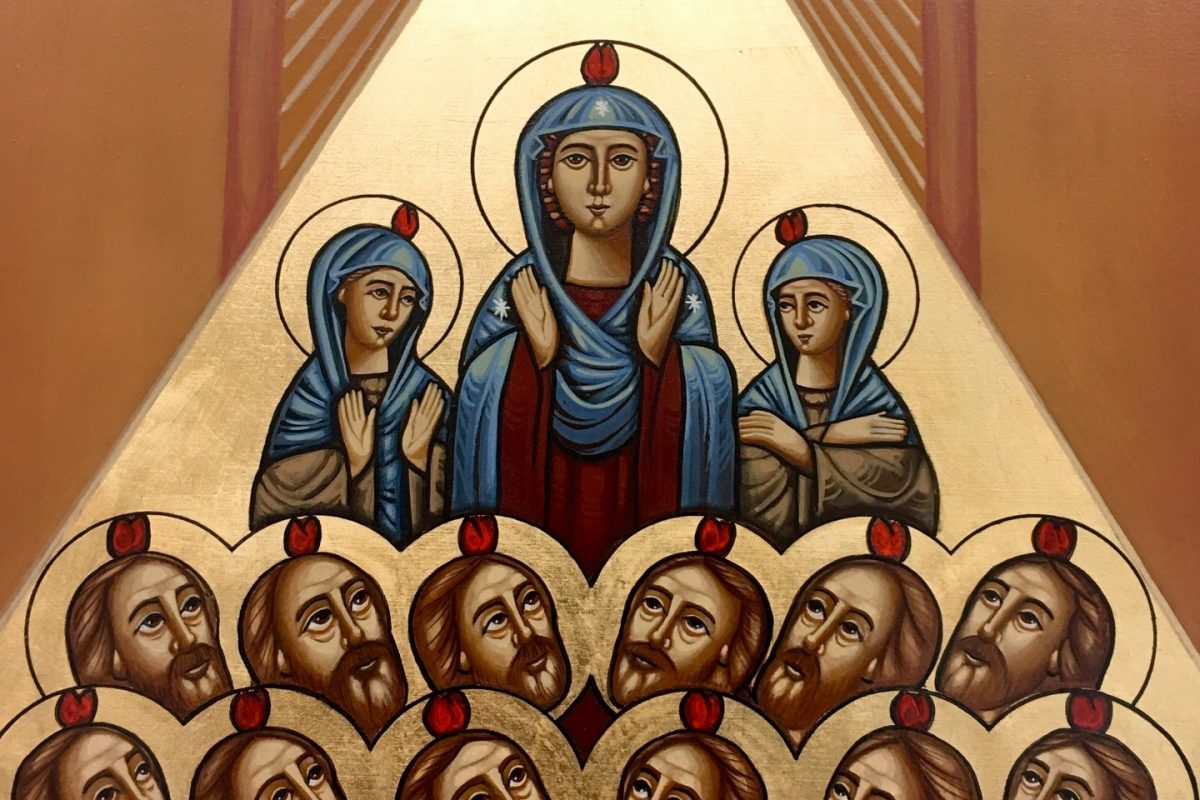 This weekend, our Mother, the Holy Church, guides us in the celebration of the Feast of Pentecost, the feast on which the Holy Spirit descended like tongues of fire upon the Holy Apostles and other disciples of our Lord in the Upper Room. The scene is described beautifully in the Book of Acts:

“When the Day of Pentecost had fully come, they were all with one accord in one place. And suddenly there came a sound from heaven, as of a rushing mighty wind, and it filled the whole house where they were sitting. Then there appeared to them divided tongues, as of fire, and one sat upon each of them. And they were all filled with the Holy Spirit and began to speak with other tongues, as the Spirit gave them utterance” (Acts 2:1–4)

Perhaps one of the most striking aspects of this passage is the unity of our Lord’s followers before and after the descent of the Holy Spirit. They are described as being “all in one accord in one place.” The place, of course, was the very place in which our Lord instituted the Mystical Supper, the Upper Room, which is clearly a symbol of the Church. Thus, our Savior’s followers strove to live in one accord and were united in the Church before the Holy Spirit descended upon them.

When the Holy Spirit descended upon them, that unity between them was strengthened and sanctified into something even more wonderful. Hundreds of years earlier, the Holy Spirit inspired the Holy Prophet-King David to prophesy about what would happen:

When brethren dwell together in unity, it is like the oil of myrrh – a symbol of the Holy Spirit – on the head of Aaron, freely flowing down his beard and priestly raiment. The beautiful visual of this smooth ointment flowing freely brings our minds to the free and abundant gifts of the Holy Spirit, which the Holy Apostles received as they dwelt together in unity. We read that “they were all filled with the Holy Spirit and began to speak with other tongues, as the Spirit gave them utterance” (Acts 2:4). The fact that the Holy Apostles began to speak in different languages simultaneously emphasizes their unity. Through the work of the Holy Spirit, they were able to transcend the different languages that divided mankind into different races and nations. Because they strove to be united, the Holy Spirit blessed their unity and granted them grace to further unite the world through their active preaching and ministry throughout the world. As St. Irenaeus of Lyon put it, “With one accord in all languages, they uttered praise to God, the Spirit bringing distant tribes to unity and offering to the Father the firstfruits of all nations.”

This message of unity is especially important for us living in a world that exalts individualism and self-determination. We oftentimes find it difficult to overcome our sense of self and yield to the will of someone else for the sake of unity. The Holy Apostles certainly could have adopted that way of life after our Lord’s Ascension. Each of them had amazing personal experiences with our Savior and received treasures of wisdom from Him. They could have gone their own ways after His Ascension and preached the Gospel in their own way. But they didn’t. Instead, we find them united and living in one accord while waiting for the descent of the Holy Spirit. And when the Holy Spirit came upon them, He took the small measure of unity for which they struggled and magnified it into something far greater. They were given the grace to unite the world by their preaching. How else could a fisherman like the Holy Apostle Peter convert 3,000 souls in one day after a simple sermon? He was given this gift to unite those souls in the faith because he first strove to maintain the unity with his brethren and live in one accord with them. For this reason, the Holy Apostle Paul exhorts us,

I, therefore, the prisoner of the Lord, beseech you to walk worthy of the calling with which you were called, with all lowliness and gentleness, with longsuffering, bearing with one another in love, endeavoring to keep the unity of the Spirit in the bond of peace. There is one body and one Spirit, just as you were called in one hope of your calling; one Lord, one faith, one baptism; one God and Father of all, who is above all, and through all, and in you all (Eph 4:1–6).

The unity of the Holy Apostles on Pentecost is a powerful contrast to an event we encounter earlier in human history, the building of the Tower of Babel in Genesis 11. In both Pentecost and Babel, we see a project to unite all of mankind through the unity of language.

In Babel, the unity that was being sought was a unity pursued by men for the sake of their own glory. The inhabitants of Babel said to each other in their common language, “Come, let us build ourselves a city, and a tower whose top is in the heavens; let us make a name for ourselves, lest we be scattered abroad over the face of the whole earth” (Gen 11:4). Their goal, then, was to make a name for themselves. Their whole project came from their arrogance and desire to have power and fame.

On the Day of Pentecost, however, the Holy Apostles use their common language, not to speak of themselves, but rather, to speak about the mighty acts of God. This is an important contrast between them: the people of Babel used their common language to build a monument to themselves whereas the Holy Apostles on Pentecost used their common language to build a monument to God. St. Cyril of Jerusalem commented on this contrast, saying, “In Babel, that former confusion of tongues, there was a division of purpose, for their intention was evil; on Pentecost, there was a restoration and union of minds, since the object of the Disciples’ zeal was pious.” St. Augustine puts it simply, saying, “Through proud men the languages were divided; through the humble apostles, they were reunited.”

To be united according to the Spirit is to become decentered from ourselves and recentered on God. It is to go from a life in which we care primarily about ourselves and our needs to Christocentric life, a life that has Christ at its center. The reason the Holy Apostles were united in the Spirit on Pentecost is because they underwent this transformation in their lives. Before Pentecost, we find them seeking their own glory as they debated with each other who was the greatest among them and which of them would sit at the right- and left-hand of our Lord Jesus Christ. After Pentecost, however, when the Holy Spirit descended upon them and shifted their focus away from themselves and towards Christ, we are told that they formed a “community…of one heart and mind.” The new language they spoke was the language of humility. Because they humbled themselves, they were united through the power of the Holy Spirit. The lesson for us is that, when we humble ourselves, we will increase in the measure of the Holy Spirit. And when we have the Holy Spirit, we will have unity, because the Holy Spirit does not simply bring unity from an external source. Instead, He is unity and He makes unity. He is the bond of unity that exists within the Church. One of the best images of this fact is the analogy of the soul and body used by St. Augustine. He teaches us that, what the soul is to the human body, the Holy Spirit is to the Church, which is the Body of Christ. Just as the soul animates and keeps together the human body, so also does the Holy Spirit give life and unite the Church. This is because the Holy Spirit Himself is unity.

We see this concept come to life in the Holy Apostles. In terms of their personalities and backgrounds, they were as different as any twelve men could be. The Gospel makes it clear that our Lord Jesus Christ did not choose them because of the compatibility of their personalities. Throughout the Gospel, we see each of them acting in radically different ways. Nonetheless, today, on Pentecost, they were bound together in a community of love through the Holy Spirit. This community was not based on mutual compatibility or common interests, but rather, the community was centered on Christ and united in the Holy Spirit.

It is the same with us today. We are not a church because similarly minded people came together; we are a church because God made a community out of us through His Holy Spirit. We see that the Church is not an institution, but rather, it is a miracle and a mystery. For centuries, the Holy Spirit was given only to prophets, kings, and judges, but now, anyone with faith may receive the gift of the Holy Spirit through the Church, irrespective of whether you are a fisherman or tax collector, Jew or Gentile, male or female, young or old.

As we celebrate the Feast of Pentecost and the strong emphasis on unity through the Holy Spirit, it is my hope that we will all examine our lives and meditate on what it means to be united. Let us avoid being united by our own desires according to what we think is best, like the builders of the Tower of Babel. Instead, let us be united by first being humble. As St. Paul tells us, we must “preserve the unity of the spirit in the bond of peace.” We know that Satan and his demons constantly strive to divide us. Our job is to recognize this and constantly fight to maintain the unity among us. Think of the example of a spider weaving a beautiful web. As soon as the web tears, the spider will rush to fix the tear by whatever means possible so that the web always remains beautiful and functional. This is what we have to do in our relationships and as a church. If we find a division — a tear, so to speak — among us, we must rush to fix it by whatever means possible. St. Paul teaches us that the best way to preserve unity is through the bond of peace. This essentially means that, when any division arises, we must be quick to make peace between both sides as quickly as possible. If we bring peace first, the unity will come.