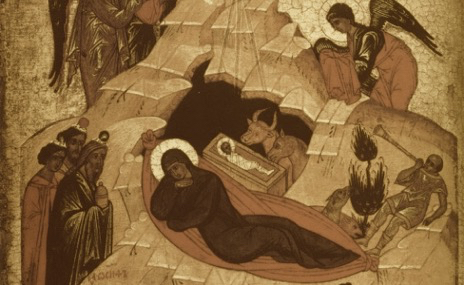 It was not until the bitter dispute over the Arian heresy that the Nativity of Christ was instituted as an independent Feast Day. The physical birth of our Lord becomes the principal issue in the controversy during the fourth and fifth centuries concerning the human and divine natures of Jesus. This thelogical opposition to the Church inspired artists to create imagery of Christ’s birth. 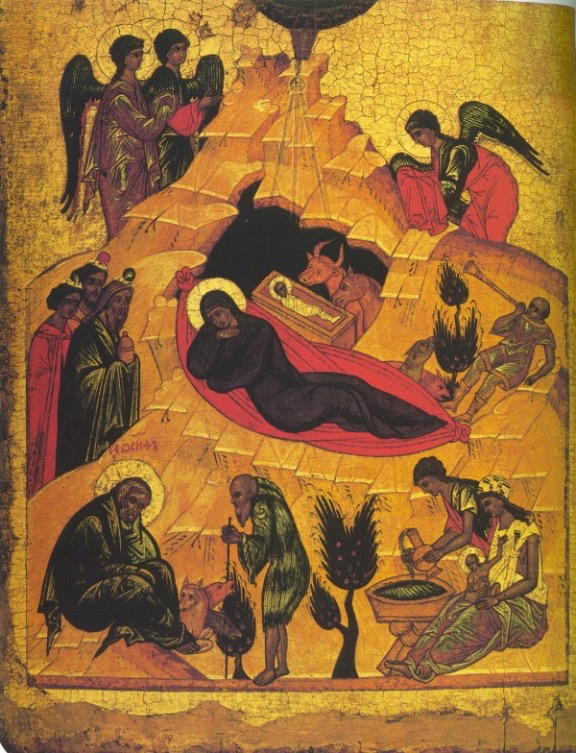 It is surprising to see how the representation of the event of the birth of the Saviour in the Orthodox Church differs from the one in the West. In the West we see the birth of the little Child and the goodness and humanity of God who is born to us. The Orthodox Church puts the emphasis more on the great mystery of God’s coming amongst men, on the realisation of the promise of the arrival of the Messiah.

There is one central character: it isn’t the Lord, but the Mother of God. Larger than the other characters, she is shown in the center resting on a red pillow. This signifies first and foremost that she is the One who gives us God, the Theotokos, the God Bearer, the Mother of God. Often, she isn’t turned towards the child but towards us, because she is Mother of all men.

A triple ray reaches us from heaven, representing the Holy Trinity. Joseph is seated below on the left. The apocryphs tell us that Satan has come to tell him that it is impossible that a child is born from a virgin.

Next to the manger stand the ox and the ass: they will become a permanent part of the Nativity icon. One or more shepherds are represented in the central scene, and in most icons of recent centuries, the Magi are included as well. (It is worth noting that the Magi, Balthazar, Caspar, and Melchior, are on the Church calendar on the feast of the Nativity).

Although at the beginning of the fourth century Christianity was proclaimed as the official religion of the Empire, a new kind of struggle emerged on the horizon. In the course of time there were many individuals discrediting Christ and disseminating false teaching among the faithful. Some of such expressed opinions gained considerable attention of people and caused an enormous confusion within the Church. In turn, the ‘giants of faith” arose from among the ranks of believers in defence of the True Faith. One of such pride-afflicted figures was Arius. A titanic wave of his followers threatened Christianity. It was necessary for the spiritual leaders of the entire Church to assemble and settle this alarming argument.

It was not until the bitter dispute over the Arian heresy that the Nativity of Christ was instituted as an independent Feast Day. The physical birth of our Lord becomes the principal issue in the controversy during the fourth and fifth centuries concerning the human and divine natures of Jesus. This thelogical opposition to the Church inspired artists to create imagery of Christ’s birth.

Reflecting closely upon those early days, the roots, we should not only appreciate our Orthodox heritage better, but to earnestly search our inner potential and rededicate our commitment to the safeguard of our Faith. Today, probably, most of us think that Arius was just another ring-leader. Not so! He would not enter into the pages of history if there were no response to his claim. If he had succeeded, there would be nothing left resembling Christianity. Arius focused his thinking on the divine nature of Christ and protested that since Christ was born, He did not exist at one time and, therefore, He is not truly divine. Picture the Church whose God falls short of divinity. As preposterous as it may sound, and although weakened, the Arian controversy persisted until the seventh century – and vestiges of it remain even today among Jehovah’s Witnesses and some protestant sects.