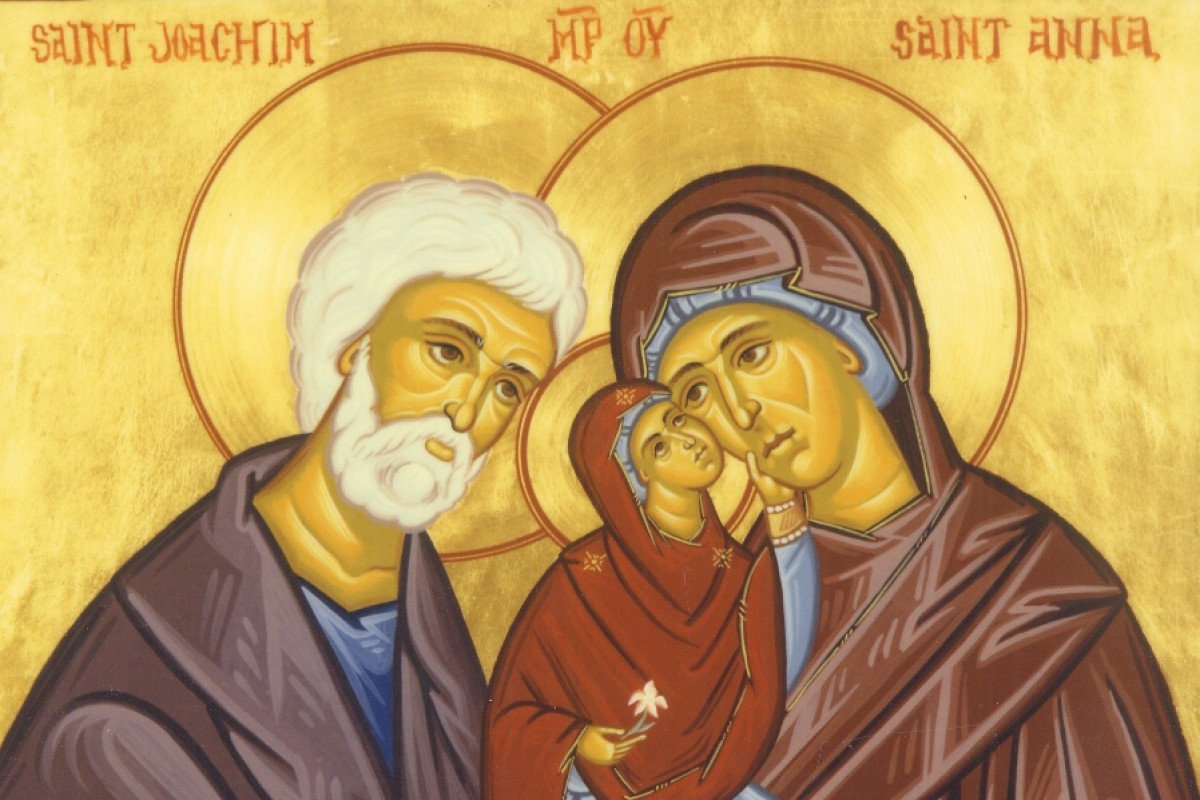 When the Holy Theotokos was only three-years-old, her parents fulfilled the vow they made to the Lord and presented her in the temple adorned with fine, embroidered clothing as they chanted sacred songs, reflecting the prophecy of the Psalmist,

The High Priest of the Temple — who some say was none other than the Holy Zacharias, the husband of Anna’s niece, Elisabeth, and the future father of the Holy Forerunner John the Baptist — met her at the bottom of the steps leading to the altar. In the Jewish temple, which was built on a mountain, there were 15 high steps that led up to the altar, which only the High Priest and priests could enter. As they ascended each step, they recited Psalms 119-133, which are accordingly called the “Psalms of Ascent” or the “Song of Ascents.” They represent different stages or degrees in the spiritual growth of a person. For this reason, the priests recited these 15 psalms as they ascended the steps to the altar.

When the three-year-old Virgin was placed on the first step, it initially seemed as though there was no way for her to make it up the 15 steps. However, by the grace of God, the holy infant quickly ascended the 15 steps to the altar. The High Priest, amazed at the holiness of the child, led her into the Holy of Holies, which was the holiest part of the altar that the High Priest could enter only once a year to offer sacrifice. Theophylactos, Patriarch of Bulgaria, commented,

At that time, the High Priest was in ecstasy, filled with the Spirit of God, and understood that the maiden was the dwelling place of divine grace and more worthy then he to stand always before God’s countenance. He remembered that the Law commended the Ark be placed in the Holy of Holies and straightway perceived that this ordinance pertained to the maiden.

Everyone who witnessed this marveled that the High Priest would take this young child to the Holy of Holies.

The entrance of the Holy Theotokos into the temple and the Holy of Holies carries great spiritual significance. She entered the Temple so that she might herself become a living temple of God. Heretofore, Jews believed that God dwelt only in the temple made with hands, but in the Incarnation of our Lord Jesus Christ, the dwelling place of God was the Holy Theotokos, the temple not made with hands. It wasn’t that our Lord simply needed a human body and therefore chose any random woman; He chose the one who chose Him with all her heart, soul, and entire being. As He spoke in the Holy Gospel, “If a man love Me, he will keep My words: and My Father will love him, and We will come unto him, and make Our abode with him” (Jn 14:23). This is precisely what He did in a marvelous way with the Holy Theotokos. Indeed, Holy Tradition teaches us that she spent her days in the temple reading the Holy Scripture, occupied in prayer, and advancing in her love towards God.

The Holy Theotokos was therefore presented in the temple so that she herself might become the “Holy of Holies,” the living altar and temple of the Incarnate Logos Whom she carried in her womb for nine months. It was not a rite of passage for her, but rather for the temple at Jerusalem. She who is the Living Temple sanctified the temple made with stone. Her entrance thus marked the end of the physical temple in Jerusalem, which was considered to be the only dwelling place of God on earth, and the beginning of all mankind bearing God through our Lord’s Incarnation. The result is that we, too, can be made dwelling places and temples of the Living God, as the Holy Apostle reminds us that we are “being built together for a dwelling place of God in the Spirit” (Eph 2:22).

Let us meditate on the humbling mercy and compassion of God Who condescends and permits us, despite our many sins and weaknesses, to be dwelling places for Him. We should remember this especially when we approach to partake of the Holy Body and Precious of our Lord in the Mystery of the Eucharist. What God offers us is a free gift and grace, but it requires a response and cooperation on our part, as well. We must live according to this gift and grace, and strive to bear God in our actions and hearts: “If a man love Me, he will keep My words: and My Father will love him, and We will come unto him, and make Our abode with him” (Jn 14:23). ☩

2 Responses to "The Holy Theotokos as the Living Temple"