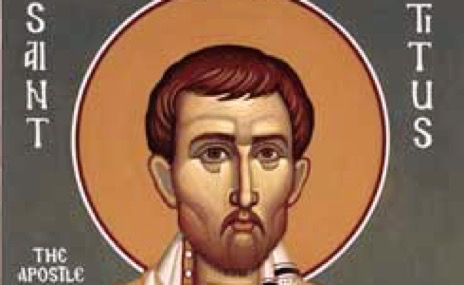 On 18 Kiahk, our Mother, the Holy Church, celebrates the Feast of the Relocation of the Relics of the Holy Apostle Titus from Crete to Constantinople.

The Holy Apostle Titus was a Gentile, a pagan, and was well educated in Greek philosophy and literature. Tradition relates that he visited Jerusalem and there heard Christ preach, an experience that changed his life. Later, he was baptised by the Holy Apostle Paul and assisted him during his missionary journeys. In time, Titus was made Bishop and spiritual Father of the Christian community on the island of Crete. Paul regarded Titus so highly that he referred to him as his “own son” (Tit 1:4). St. Titus was enormously successful in his missionary endeavors on Crete, bringing countless pagans to Christ. He lived to be ninety-four years of age.When Emperor Constantine embraced Christianity, he began to enrich churches throughout his empire, and especially those within the imperial city of Constantinople, by collecting the relics of the martyrs and saints. After hearing about the relics of St. Titus, he sent a delegation of bishops to collect them to adorn a splendid church that was built in his name.

In the Coptic Synaxarion, we read about a miracle that St. Titus performed during the relocation:

God honored this saint by manifesting many miracles and signs from his sacred relics. Among them, when they carried the relics to the Sanctuary (the Hekal) of the church, the stone coffer fell on and broke the foot of one of the carriers. The man took some of the oil of the lamp (Kandeel) that was hanging in front of the icon of the saint, and anointed his foot with it, then wrapped it. He remained in the church that night beside the coffer, for he could not go to his home. The following morning, his foot was cured. What remained on it were only traces of blood. He and all those who saw him marvelled. He washed the blood and walked on his feet as usual without pain, glorifying the Father, the Son and the Holy Spirit, the One God, and witnessing to this miracle.

Through the prayers of the Holy Apostles Paul and Titus, O Lord grant us the forgiveness of our sins.