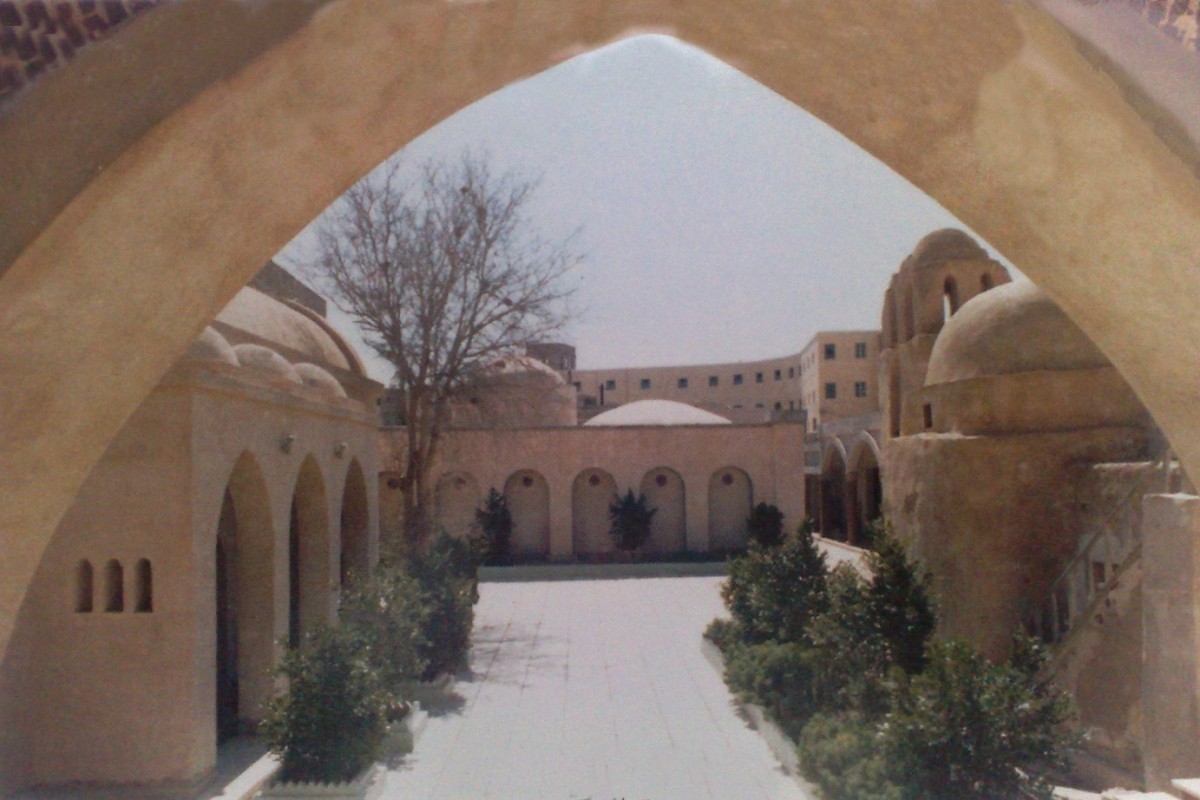 Monasticism began with Saint Antony in response to the commandment of the Gospel, which says, “Go, sell what you have, and give to the poor, and you will have treasure in heaven; and come, follow me” (Mark 10:21.) When Saint Antony personally carried out this mandate and set out for the wilderness, being so sincere in his obedience, he embodied in the desert a live, human, personal entity of obedience to the commandment. This live human entity of obedience to the gospel’s commandment became the active nucleus, the living evangelical seed which has had a spiritual aura of divine attraction for others. On the plane of a life lived out by a man in faith and honesty, ready obedience to the gospel has created the evangelical monastic model. This model has managed to emanate the power and light of the commandment itself. It is perfected in a successful experience which is alive and articulate, attractive to every heart wishing to live out the gospel.

Monasticism, on the human plane, is a craving of the soul that God loves intensely. In its divine reality, it is an evangelical, silent call and a veiled gravitation of the divine. This is what Saint Antony succumbed to and created in the desert, a successful model for realizing the craving and the call. Saint Antony’s joy with God was beyond all comprehension and continued when he lived out his joy with God. Until he reached the age of one hundred and five, he availed himself of the power of the gospel and proved the truthfulness of the craving and the integrity of the call. This became the methodology of monasticism which Saint Antony handed down to the world.

The monasticism of today bears the same features of the original craving which was personalized in the success of St. Antony’s departure from the world. Its motives, though, have begun to differ from those of Saint Antony. Today, 99% of the individuals who launch out for monasticism lack the factor of firm, spontaneous obedience to the commandment of the gospel, the thing which spurred Saint Antony to embark on his journey. What was so effective in the setting of Saint Antony was the dynamism of the divine commandment, its divine action, which is latent within it, and which is never revealed unless man clings to it. Saint Antony’s exodus was a craving and a desire on his part.

Yet until this point the human-divine model for the monk was not complete, for it still lacked the divine element. There entered for Saint Antony the factor of firm, submissive obedience, not hindered by any obstacle, difficulty, fear or reasoning. His going out was like someone throwing himself into the sea, where the sea, in Saint Antony’s eyes, was God.

In its very sincere quality, this obedience was rendered divine and fulfilled Saint Antony’s craving and desire with grace and success, and rendered his craving and desire divine. Thus was perfected the complete monastic model which is human and divine at one and the same time, and which warranted the success of monasticism from the first step.

Here we must note that the verdict of success for Saint Antony’s monasticism was achieved from the very beginning. His flaming heart was upheld as he clung to the commandment and relied on it, as one who leans on God’s arm. So there could not have been any doubt that Saint Antony would succeed.

This leads us into the fundamental rule for departure to the monastic life, which guarantees its authenticity and success. Its motive should be purely evangelical, that is, going out should not be from mere fancy or fondness, for the sake of a trial on the way, from despair of the world, out of a sense of heroism, out of imitation, for a career of ministry, or as a job. All this would declare from the outset a sheer human model, lacking the divine factor of monasticism whose way is guaranteed to the end. It may be a successful monasticism from a human perspective when the monks accomplishes great works or services, but such works can be done even more perfectly by someone who is not a monk at all.

As for divine monasticism, it cannot be measured by works or services, but by the extent to which the presence of God is realized in the monk’s life. He actualizes by his monkhood a living human-divine entity existing in itself, the very aim of divine monasticism. Divine monasticism is a living testimony to the world for the existence of God as alive and active in a man who holds fast to the word of God. He becomes a church in himself and at the same time a buttress to the universal church and a declaration of its meaning.

The success of divine monasticism rests firmly on the word of God and his promises. The signs of its success are constant joy, openness of heart, and mind to the word of the gospel, understanding all the mysteries of salvation the in gospel and communicating the message of salvation to anyone who asks for it, as the monk lives it, feels it, and sees it.

The Value of the Desert and its Effect on Monastic Life

To Saint Antony, the desert represented leaving the world, including father, mother, brother, sister, wife, possessions, land, and money. This also means emptying a man of all the human factors which hamper the shift from a life after the flesh to a life after the Spirit. It means moving from what is human to what is divine. Characteristic of Saint Antony, it is a spontaneous simplicity, flinging oneself into God’s arms.

The desert, as I have lived it out, has two faces: a hard, desolate, deadly face which appears when God’s face hides, and a face of paradise which is like the Garden of Eden with its joys that gratify the soul and comfort it. Man lifts his heart and eyes from earth to heaven and feels the presence of God. The awe of God overwhelms him, and he forgets himself, his existence, and the whole world.

The Dread of the Night for a Hermit in the Desert

Being alone and unarmed, when the night descends and darkness covers the whole surrounding sphere in awesome silence, the natural thought of the flesh is to imagine the wild beasts. Trembling fills the entire body, but just as soon, the sense of faith appears, faith upheld by grace and preserving power, and dispels any signs of darkness from within and from without. Nothing brings man through this inevitable and repeated conflict except resorting to the vigil of the night in prayer. In this, the nature of prayer differs greatly from every other kind of prayer performed within closed doors and under the safety of roofs. It begins in the spirit of crying to God for help. Then grace takes the soul in quiet confidence, assuring it that it is kept by the hand of the Almighty. Immediately, the soul breaks out in praise and gladness as it feels sustaining power, as if man is surrounded by an army of angels. In this prayer, the soul is greatly lifted up and continually soars as it gazes upon the gracious favors of God to all the saints who have preceded it in the way. Eventually, the soul loses all feeling of terror, fear and illusions, and enjoys the feeling of closeness to God, resting like a weaned child on its mother’s breast.

The negative element decreases as the experience is repeated night after night. After a while, man moves from terror to the feeling of closeness to God as he spends all night, whether in fervent prayer, singing and rejoicing, contemplation or writing. Finally, all effort is spent, and the body reclines to take its share of rest.

If man ever comes back out of the desert, he comes out with a rich experience. He has experienced life with God, delved deeply into prayer, discovered the secrets of the gospel as he lived them in full spiritual awareness and tasted what it means to cling to God. The wilderness is the school of the spirit. Its pruning of the soul is tremendous, and the riches of its fruit are infinite.

One of the dangers faced by the hermit in the desert when he contents himself with all-night prayer is that he relaxes when the day comes and finds nothing that spiritually satisfies his mind. He lets his mind roam into the annals of the past with all of its images, and at the same time, the enemy finds an opportunity to inject his own images, as well. Then Satan ambushes him with exciting images that exhaust his spirit, and he is overcome by temptation. He finds it hard to cast out the images, because he has contented himself with set times of prayer.

For this reason, the rule of the alert monk who clings to the spirit of grace is that his meditation take place in constant prayer of heart and mind. He never interrupts it except for necessary tasks, and even then, he continues to sing praise in the midst of them. If there are periods void of prayer, the become times of temptations and struggle with the enemy. The soul is distressed to the point of death, and remaining in the desert becomes a burden. Boredom overcomes the monk, and in the end, he convinces himself to return to the monastery or to the world. Only through constant prayer is treatment found for boredom. The monk clings to the presence of God with all his will and internal spiritual might, confining the self, whether spoken or silent, to conversation with Christ.

The absence of Christ in the heart and in the spiritual and intellectual awareness results in a monk who is so lost that he can never recover except through leaving the desert and solitude as a defeated man. The desert means living in God’s presence, for leaving the world inevitably enters him into a covenant with Christ.