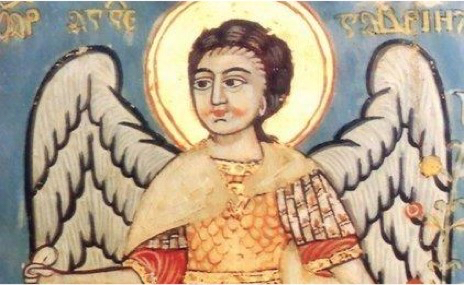 On December 31, our Mother, the Holy Chuch, celebrates the Commemoration of the Holy Archangel Gabriel, one of the seven archangels who stand before the Throne of God.

He is the archangel who announced the Incarnation of the Son of God to the Most Holy Theotokos Mary and all of mankind. He also appeared to Zacharias to announce the birth of the Holy Forerunner, John the Baptist. Of himself, Gabriel said, “I am Gabriel, that stand in the presence of God” (Lk 1:19). Some Fathers of the Church believe that the same Holy Archangel Gabriel appeared to the Holy Joakim and Anna to announce the birth of the Holy Theotokos and that he is the one who spoke to Moses in the wilderness concerning the Book of Genesis.

Since he stands before the Throne of God, he belongs to the first and greatest order of the heavenly powers. The seven who stand before God are known in the Coptic tradition as Michael, Gabriel, Raphael, Soriel, Sedakiel, Sarathiel and Ananiel. In the Eastern Orthodox Church, they are named slightly differently: Michael, Gabriel, Raphael, Uriel, Salathiel, Jegudiel, Barachiel, and perhaps Jeremiel (cf. 2 Esd 4:36).

Each of these holy luminaries offers a particular service before God:

The holy luminaries possess power from God in order to serve Him. By their nature, they possess more knowledge, power, and ability than humans. Since they are pure and sinless beings, they have the gift of prescience or predicting the inevitable events of the future. They have great knowledge and wisdom, much like Adam and Eve had before the Fall, but their knowledge and wisdom does not reach the level of God’s. Only God is omniscient; only God knows all things.

The fact that angels possess more knowledge, power, and ability than humans is reflected in the words of David the Psalmist: “What is man that You are mindful of him, And the son of man that You visit him? For You have made him a little lower than the angels, And You have crowned him with glory and honor” (Psalms 8:4–5). Elsewhere, in Psalm 103, David speaks of the angels excelling in strength and doing the commandments of God.

As befits their ability, angels worship and praise God day and night. Since they are ministering spirits, they stand before God at all times and are always ready to fulfill His will and keep His commandments. The fact that angels are always ready to fulfill God’s will is reflected in their names. For example, the archangels all have the word “El” in their names. “El” is one of the basic names of God in the Old Testament. Gabriel is the strength of God; Michael means “Who is the strength of God”; Raphael is the healing of God, etc.

Angels are sent by God to earth for our care and protection. Angels rescue us from our spiritual and material enemies, as David teaches us when he says, “The angel of the LORD encamps all around those who fear Him, and delivers them” (Psalms 34:7).

God created angels with great power that comes from Him. In 2 Samuel 24, we read about how the angel of the Lord stretched out his hand against the city of Jerusalem to destroy it. In 2 Kings 19, we read about how one angel killed 185,000 Assyrian soldiers.

Part of the great power of the angels is the authority they have over the material elements. There is no human or worldly obstacle that can prevent an angel from fulfilling the commandment of God. For example, we read in Daniel 3 that the LORD sent His angel to the Three Holy Youth and delivered them from the fiery furnace, making the fire powerless over them. Notice, however, that the angel of the Lord did not change the nature of fire; the fire did consume many others, but through the power of the angel, which is from God, the fire did not consume the Three Holy Youth. Another example is the angel that delivered Daniel from the lion’s den. This angel had power to shut the lions’ mouth in Daniel’s presence. Again, however, the angel did not change the nature of the lions, because the same lions devoured those who conspired against Daniel.

We also see the great power of the angels in the New Testament. When the Jews captured and imprisoned the Holy Apostles and placed them in a prison, it was an angel of the LORD who opened the door at night and freed them. The same thing happened to St. Peter when King Herod imprisoned him. We read in Acts 12 that Herod had 16 soldiers guarding St. Peter; he was chained with two chains to two of these soldiers. Nonetheless, with great ease, the angel of the LORD freed St. Peter from this prison because of the great power he had from God.

Every nation and every Christian each have their own guardian angels. They record every thought, word, and deed of man that will be revealed on Judgment Day.

For this reason, on this day, as we commemorate the Holy Archangel Gabriel, let us entreat their intercessions before our Lord that He may grant us forgiveness for our sins.