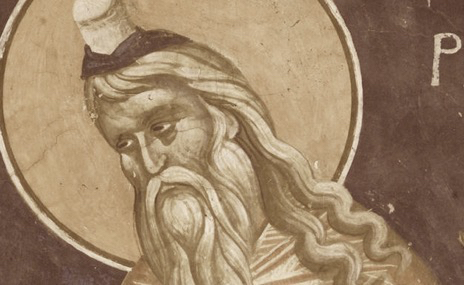 In the Gospel reading of the Fourth Sunday of the Holy Month of Koiak from Luke 1:56-80, we hear the words of the beautiful canticle (praise) uttered by the Holy Zacharias, the father of the Holy Forerunner, John the Baptist.

We see this more clearly in the actual words of the Canticle of St. Zacharias:

Blessed be the Lord God of Israel; For he hath visited and redeemed his people, And hath raised up an horn of salvation for us In the house of his servant David; As he spake by the mouth of his holy prophets, Which have been since the world began: That we should be saved from our enemies, And from the hand of all that hate us; To perform the mercy promised to our fathers, And to remember his holy covenant; The oath which he sware to our father Abraham, That he would grant unto us, that we being delivered out of the hand of our enemies Might serve him without fear, In holiness and righteousness before him, All the days of our life. And thou, child, shalt be called the prophet of the Highest: For thou shalt go before the face of the Lord To prepare his ways; To give knowledge of salvation unto his people By the remission of their sins, Through the tender mercy of our God; Whereby the dayspring from on high hath visited us, To give light to them that sit in darkness and in the shadow of death, To guide our feet into the way of peace. (Lk 1:67–79).

Blessed be the Lord God of Israel; For he hath visited and redeemed his people

Notice how St. Zacharias begins his canticle by glorifying God for two things: visiting and redeeming His people. This is precisely what we celebrate on the Glorious Feast of His Nativity. Our Lord visited us when He came to us in our own flesh and united our human nature with His divine nature so that He might sanctify and bless our nature.

David the Prophet spoke of this very visitation in Psalm 8 when he said, “What is man that You are mindful of him, and the son of man that You visit him?” (Ps 8:4). Elsewhere in the Psalms, David prophesies again about God visiting His creation when he says, “Return, we beseech You, O God of hosts; Look down from heaven and see, And visit this vine” (Ps 80:14). Jeremiah the Prophet spoke of God visiting mankind when he said, “O LORD, You know; Remember me and visit me” (Jer 15:15). Elsewhere, Jeremiah speaks of the captivity of the Israelites in Babylon. The Israelites, being held captive in Babylon, symbolized mankind’s captivity to death and sin. Consider what Jeremiah says about the Israelites: “‘They shall be carried to Babylon, and there they shall be until the day that I visit them,’ says the LORD. ‘Then I will bring them up and restore them to this place’” (Jer 27:22).

Our Lord visited us and united our human nature with His divine nature so that He might sanctify and bless our nature. Our Church, rich in Her traditions and liturgical worship, reflects this concept well in the Liturgy of St. Gregory, in which the priest prays, “You blessed my nature in Yourself.” This was the purpose of the Lord’s visit to us in the flesh: to seek out those who had become strangers to Him through sin, to save us, and to give us eternal life through the redemption He accomplished on the Holy Cross. He took the punishment that we deserved onto Himself. As St. Paul teaches us, we were “bought at a price” (1 Cor. 6:20), the price of His precious Blood.

It is sometimes difficult for us in modern times to understand concepts like “horn of salvation,” because horns today have nothing to do with the horns in the Old Testament. St. Jerome teaches us that, in the Old Testament, the sound of the horn represents kingship and power. If we replace “horn” with those two words, then the passage would read like this: “And has raised up a kingship and power for us in the house of His servant David.”

So, in these words of St. Zacharias, we again see how he reveals the fulfillment of the Old Testament prophecies in the coming of our Lord Jesus Christ.

“That we should be saved from our enemies”

This praise also reveals the fulfillment of God’s promises for the future. The Holy Zacharias delivered this beautiful praise during the circumcision of his son, the Holy Forerunner, on the eighth day after his birth.

Jewish law and custom required that a male child be circumcised on the eighth day after birth. Not only was he circumcised on this day, but he was also named on that day, as well. The reason for this is as follows: God created the world in six days and rested on the seventh, which was the Sabbath. In fact, in the creation story, we do not hear about any other days except for these seven. Ever since, mankind has used the number “7” for weeks. There are seven days in a week. These seven days of a week represent man’s time… the days that man knows about. The eighth day, however, is the day beyond time. The eighth day is the eternal day. This is why, under Jewish law, boys were circumcised and named on the eighth day; this day had eternal significance in their eyes.

The words of the Holy Zacharias’ canticle, combined with the day on which it was given, therefore teach us that it is a prophecy of things to come. Zacharias not only saw the fulfillment of God’s past promises, but also future promises to come, most notably the Lord’s Resurrection from the dead. For this reason, he says that God

We see this clearly in the words of the praise in which St. Zacharias speaks of the prophecies that “we should be saved from our enemies, and from the hand of all that hate us.” The great enemies of mankind, of course, are Satan, sin and death. By our Lord’s glorious Resurrection, He delivered us from these enemies and gave us the power over them. Again, the Holy Prophet and King David presents this very clearly in the Old Testament when he says, “Through Your name we will trample those who rise up against us” (Ps 44:5), and in the New Testament, our Lord fulfills it when He says, “Behold, I give you the authority to trample on serpents and scorpions, and over all the power of the enemy, and nothing shall by any means hurt you” (Lk 10:19).

We can now have a glimpse at the richness and depth of the Canticle of the Holy Zacharias and how it unites God’s past and future promises and represents a bridge between the Old and New Testaments.

May our Lord Jesus Christ grant us the ability to recognize all of the good things He promised to us and gave to us through His divine visitation, His Nativity and glorious birth, so that we may live to worship Him and praise Him in purity and righteousness all the days of our life.