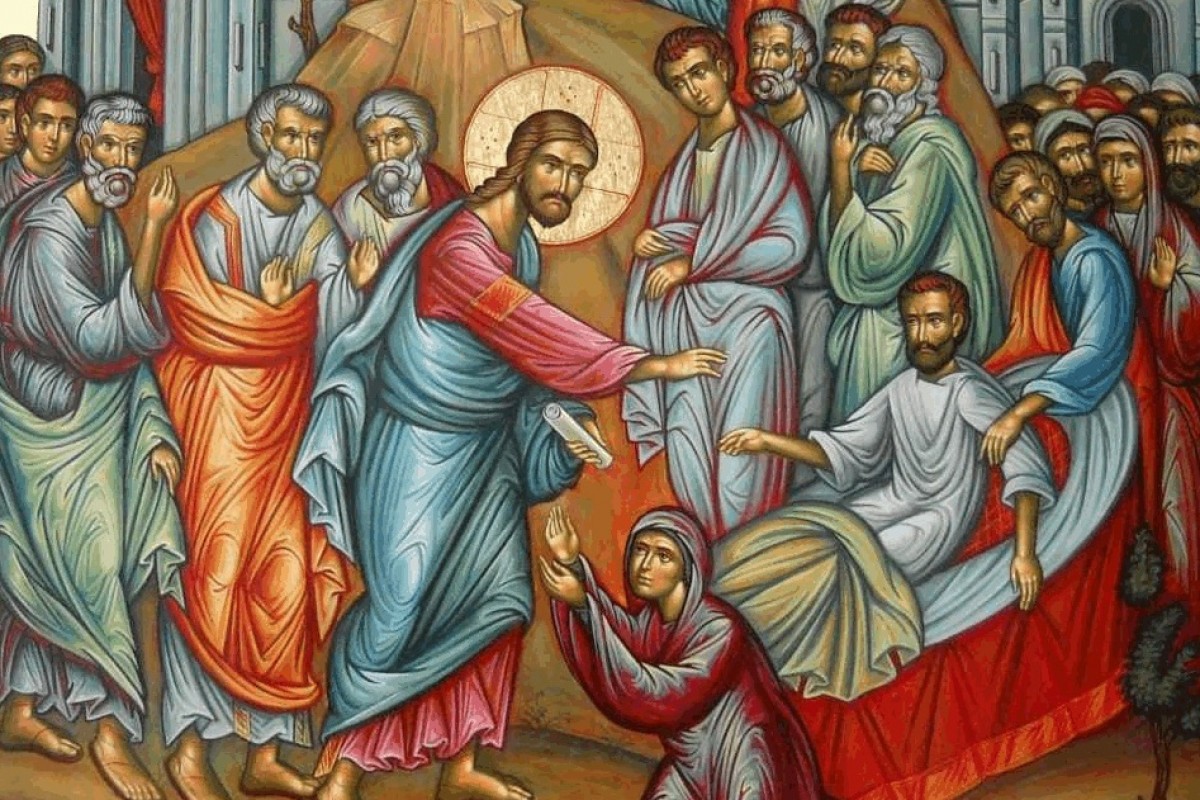 On the Fourth Sunday of the blessed Coptic month of Paopi, our Mother, the Holy Church, nourished us with the story of the Raising of the Son of the Widow of Nain in Luke 7:11-17:

“And it came to pass the day after, that he went into a city called Nain; and many of his disciples went with him, and much people. Now when he came nigh to the gate of the city, behold, there was a dead man carried out, the only son of his mother, and she was a widow: and much people of the city was with her. And when the Lord saw her, he had compassion on her, and said unto her, Weep not. And he came and touched the bier: and they that bare him stood still. And he said, Young man, I say unto thee, Arise. And he that was dead sat up, and began to speak. And he delivered him to his mother. And there came a fear on all: and they glorified God, saying, That a great prophet is risen up among us; and, That God hath visited his people. And this rumour of him went forth throughout all Judaea, and throughout all the region round about.”

As the Holy Evangelist Luke tells us, our Lord Jesus Christ arrived at the gate of Nain accompanied not only by His disciples, but by a large multitude, as well. You can imagine what kind of congestion would have been caused by this large multitude coming into the gate at this time. But there was another source of congestion. At the same time, the funeral procession of a young man, the only son of his widowed mother, was going out of the gate accompanied by a great multitude.

Death stops in its tracks. Our Lord stretched forth His Hand and death stopped: “And he came and touched the bier: and they that bare him stood still. And he said, ‘Young man, I say unto thee, Arise.’”

This funeral procession that was leaving the town of Nain represents the funeral procession of humanity. From the time of Adam and Eve’s disobedience, humanity has been one long funeral procession. Despite our greatest accomplishments, death remains our inevitable end. Consider, for example, the great conquerer, Alexander of Macedonia, to whom history has given the title, “Alexander the Great.” Although he conquered most of the known world during his time, he came face to face with death at the young age of 32, most likely the victim of poisoning. Consider all of the astronauts and cosmonauts who have explored space and even landed on the moon. Consider all of the brilliant scientists who discovered much about how God created the world, all the military heroes who conquered nations, all the great artists whose works are priceless, and many more. No matter what they accomplished, their end was death, because the history of humanity has been one, long funeral procession since the Fall of mankind.

And then something wonderful happened.

Our Lord Jesus Christ came and halted this funeral procession. Death, which was not natural to humanity, was stopped in its tracks through the lifegiving Resurrection of the Son of God from the dead. He proved that He is not only the Lord over the living, but also the Lord over death itself. This is why St. Luke uses the word “Lord” for the very first time in v. 13 of today’s passage. He wrote, “And when the Lord saw her, he had compassion on her, and said unto her, ‘Weep not.’” For six chapters, he has referred to our Lord simply as “Jesus,” but when he tells this story, he purposefully uses the word “Lord” in order to teach us that Christ is the Lord Who is triumphant over death and the power of death over us.

Thus, at the beautiful gate of Nain, death came face to face with Life Himself, our Lord Jesus Christ, and the funeral procession of human history came to a stop. Soon afterwards, our Savior would trample upon death through His life-giving sacrifice on the Cross and destroy the power of death over man through His descent into Hades, where He liberated the captives who believed in Him.

This, then, is the cause of our joy. Every joy we experience as Christians emanates from our Savior’s triumph over death.

2 Responses to "The Beautiful Gate of Nain"