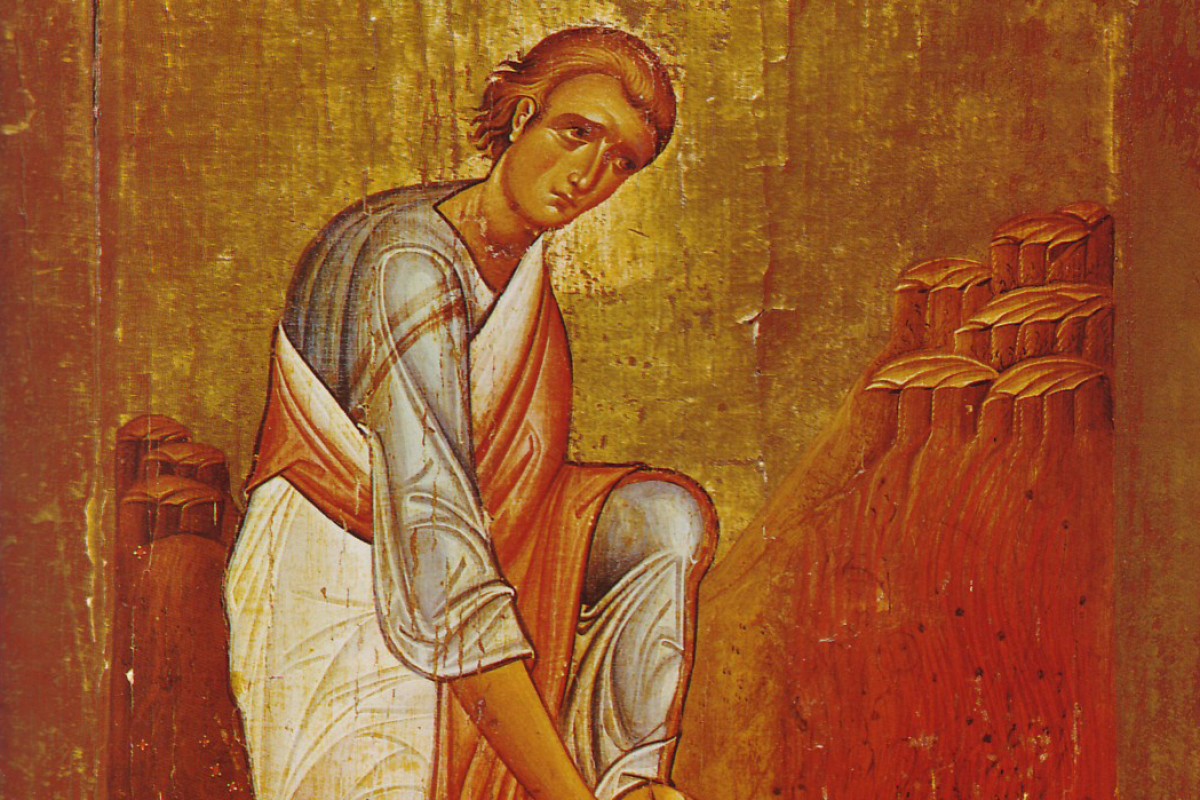 One of the most beloved Kiahk melodies in the Coptic Orthodox Church is the praise on the Thursday Theotokion known as “The Burning Bush.” The story of Moses and the burning bush is easily found in the Book of Exodus:

And Moses was feeding the flock of Jothor his father-in-law, the priest of Madiam; and he brought the sheep nigh to the wilderness, and came to the mount of Choreb. And an Angel of the Lord appeared to him in flaming fire out of the bush, and he sees that the bush burns with fire,—but the bush was not consumed. And Moses said, I will go near and see this great sight, why the bush is not consumed. And when the Lord saw that he drew nigh to see, the Lord called him out of the bush, saying, Moses, Moses; and he said, What is it? And he said, Draw not nigh hither: loose thy sandals from off thy feet, for the place whereon thou standest is holy ground. And he said, I am the God of thy father, the God of Abraam, and the God of Isaac, and the God of Jacob; and Moses turned away his face, for he was afraid to gaze at God (Ex 3:1–6).

But isn’t this confusing? Why would Moses identify Him as the “Angel of the Lord” initially and then switch to simply “the Lord” only a couple of sentences later?

The answer is beautiful and awe-inspiring.

The word “angel” (ἄγγελος) simply means “messenger,” one who is sent by God. We are familiar with the multitudes of holy angels who have ministered for our salvation throughout human history, luminous and spiritual beings like the Cherubim, Michael, Gabriel, Raphael, and many others. What we are oftentimes unfamiliar with is the fact that our Lord Jesus Christ Himself is called an Angel or Messenger in the Holy Scripture, most notably in Book of Esaias:

For a child is born to us, and a son is given to us, whose government is upon his shoulder: and his name is called the Messenger of great counsel: for I will bring peace upon the princes, and health to him (Is 9:6).

When Moses beheld the Angel of the Lord as flaming fire in the burning bush, he beheld none other than the Preincarnate Christ Who is the Messenger sent by God while being of one Essence with God, as we say about Him in the Nicaean-Constantinopolitan Creed, “Light of Light; True God of True God; begotten, not created; of one Essence with the Father.”

This reality becomes especially clear when we consider how the Holy Scripture speaks of Moses as one who spoke to the Lord face to face as with a friend (Ex. 33:11, 34:10). Indeed, Moses asked the Lord with all boldness, “Manifest Thyself to me” and the Lord granted his request:

And the Lord said to Moses, I will also do for thee this thing, which thou hast spoken; for thou hast found grace before me, and I know thee above all. And Moses says, Manifest thyself to me. And God said, I will pass by before thee with my glory, and I will call by my name, the Lord, before thee; and I will have mercy on whom I will have mercy, and will have pity on whom I will have pity. And God said, Thou shalt not be able to see my face; for no man shall see my face, and live. And the Lord said, Behold there is a place by me: thou shalt stand upon the rock; and when my glory shall pass by, then I will put thee into a hole of the rock; and I will cover thee over with my hand, until I shall have passed by. And I will remove my hand, and then shalt thou see my back parts; but my face shall not appear to thee (Ex 33:17–23).

Behold, what graciousness! What love! What humility! The Lord of Hosts deigns to manifest Himself to His servant, Moses. But there is a seeming conflict here: why does the Holy Scripture say Moses conversed with God face to face if the Lord Himself said, “My face shall not appear to thee?” Also, didn’t our Lord Jesus Christ tell the Holy Apostle Peter, “Not that any man hath seen the Father, save he which is of God, he hath seen the Father” (Jn 6:46). What, then, did Moses see? The Holy Augustine answers this question:

It was [the Lord], therefore, under that aspect in which He willed to appear (but He did not appear in His own very nature) which Moses longed to see, inasmuch as that is promised to the saints in another life. Hence the answer made to Moses is true that no one can see the face of God and live; that is, no one living in this life can see Him as fully as He is. Many have seen, but they saw what His will chose, not what His nature formed … when He willed … not in His nature under which He lies hidden within Himself even when he is seen. 1

Augustine thus teaches that Moses did in fact see a manifestation of God, the Angel of the Lord Who is the Preincarnate Christ, face to face, but he did not see the face of God in His Divine nature as He is, for no man can see that and live. This doesn’t mean, however, that the face of God kills, for, as the Holy Gregory of Nyssa teaches us, “how would the face of life ever be the cause of death to those who approach it?” Instead, he explains, “he who thinks God is something to be known does not have life, because he has turned from true Being to what he considers by sense perception to have being.” 2

This great gift which the Lord conferred on Moses is given to every person who beholds the face of Christ, the “Messenger of Great Counsel” Who came to us in all humility and love. The Holy Apostle Paul spoke of Him as the “Image of the invisible God, the firstborn of every creature” (Col 1:15). As the Holy Cyril of Jerusalem preached in his Tenth Catechetical Lecture, “Therefore, because no one could see the face of the Godhead and live, He assumed the face of human nature [in Christ], that seeing this we might live.” 3 And, in case there is any doubt as to whether our Lord Jesus Christ is God, of one Essence with the Father and the Holy Spirit, we recall the awesome scene on Mount Tabor when He “was transfigured before them: and His face did shine as the sun, and His raiment was white as the light” (Mt 17:2). It is no coincidence at all that, when His face radiated as the sun so that no man could bear to look at it, Moses himself was present as an experienced witness to the glory of God in Christ.

Like Moses, we behold the face of Christ through purity of life and zeal in Christian living. The Holy Basil the Great teaches us in his Long Rule 16,

The whole life of the saints and of the blessed, the example of the Lord Himself while He was with us in the flesh, are aids to us in this matter. Moses, through long perseverance in fasting and prayer, received the law and heard the words of God, ‘as a man is wont to speak to his friend,’ says the Scripture, 4

Thus, when we sing about the burning bush that Moses beheld in the wilderness during the Holy Month of Kiahk, we remember the Angel of the Lord Who appeared in the flames of fire, the Preincarnate Christ Who in all graciousness, love, and humility manifested Himself to Moses just as He continually manifests Himself to all of us who strive to behold His face in our lives. ☩