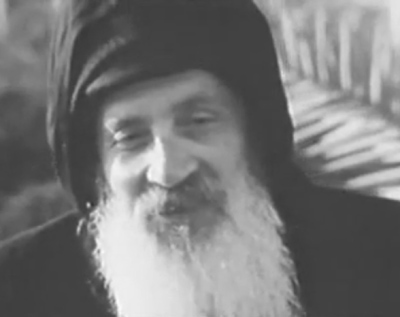 A beautiful letter to monks and contemplation on the name and place of the Desert of Sheheet, where the Coptic Orthodox Monastery of Saint Macarius resides, by the Spiritual Father of the monastery, Father Matta El Maskeen (also known in as Father Matthew the Poor.)

God offered us the grace of calling and accepting us in the sacred wilderness, i.e., the wilderness of Sheheet, the wilderness of “the weighing scale of hearts.” With its name the Holy Spirit draws our hearts to this designation’s implication concerning our life together in this holy wilderness, and offering our lives to God the Weigher of hearts and souls.

The origin of this designation, mentioned in the book Coptic Monasticism, is found in the Biography of Saint Macarius. The meaning stemmed from the time when Saint Macarius first arrived in this wilderness, slept on top of the cherubim hill, and the blessed cherubim appeared to him. When the saint started to fall asleep on this hill, he felt the cherubim’s hand palpate his heart, as if wanting to weigh it. Saint Macarius said to him, “What is it?” The cherubim answered, “I am measuring and weighing your heart aisi `mpekhyt.” Saint Macarius then said to him, “What does this mean?” The cherubim replied, “As I have acted within your heart, thus will be named this mountain, but Christ will demand fruit.”

Now, my loved ones, I mentioned this narrative as an instruction to the main subject, that is, in this wilderness, our hearts, consciences, and deeds will be weighed by God’s spiritual weighing scale. This article is an important part of the previous one in which I mentioned, “Do not be deceived! Fornicators, idolaters, adulterers, male prostitutes, sodomites, thieves, the greedy, drunkards, revilers, robbers–none of these will inherit the kingdom of God” (1 Cor. 6:9, 10 NRSV.)

But all these different kinds of sins are not weighed with God’s sensitive scales, but all the thoughts and hearts’ intentions that the devil stirs up in the mind, stirring up later the heart, our yielding to these thoughts, and the heart’s reaction to them, that immediately makes them counted as sins duly fulfilled, as Christ’s depiction states: “[E]veryone who looks at a woman with lust has alread committed adultery with her in his heart” (Matt. 5:28.) The sin of adultery was counted here as if it had been consummated, while it was only in the realm of the mind and heart.

Thus sins begin with the senses and thoughts, consequently stirring the heart, to become counted as sins.

Here I will begin to explain the meaning of “the weighing scale of hearts,” which is our work in this sacred wilderness. The devil instigates the wicked thoughts specific to every type of sin mentioned by St. Paul, who said that those who committed the m would not witness the kingdom of God.

Now, according to the weighing scale of hearts, mere thoughts, if alive in the mind, with the mind at ease with them for barely a second, the heart responding, stirred in reaction to them, immediately become counted as if they had been fulfilled in the heart without the action of the flesh. This is the danger of the ascetic life, the proof of piety, and the sincerity of a sacred living with the Father, Christ, and the Holy Spirit.

For it is impossible for a monk to be counted a true ascetic or considered a pious monk, or a truthful believer in a life of communion nwith God the Father and His Son Jesus Christ, led by the Holy Spirit, while leading a life receptive to, and engaged in evil thoughts, whether those of impurity, anger, envy, hatred or slander, carnal appetites, money, food or anything else of the heart’s desires, be it only for a moment, then finding an approving response [1] in his members, immediately moved by impure thoughts, the heart stirred in response, although for a moment, to the thought. The impulse of an undisciplined thought, and of the heart affected by the thought reacting to it, is counted an actual response, and a sin that has been completed, entering into the sphere judgment and eternal denial of the pure, ascetic and pious worshippers’ share, who are living the life communion through the Spirit rejoicing in the grace of God, with the Kingdom open to them, an opportunity and eternal share in a feast beyond words [2].

What should be done?

Here comes the practical portion of this discussion. It is based on two parts.

“I discipline my body and bring it into subjection, lest, when I have preached to others, I myself should become disqualified” (1 Cor. 9:27 NRSV.)

At this point, we have reached the essence of a hermit’s work, the beginning of the work of monks who have entered the monastery to attain a life of piety and acquire the taste of life with the Lord through the Holy Spirit.

To begin with, control the flesh with all its appetites that start in the mind and imagination, instigated by the enemy to novices for them to fall in the devil’s hands. If the monk responds to these thoughts and gives in to the imaigination, with the mind starting to take pleasure in it and responding, then sin will live in the flesh. I say that responding to the mind, even for a second, makes the heart respond to the evil power, becoming impossible to erase the effect of the evil thought, and hence the reaction of the heart and members. For Christ says that the sin was thus fulfilled in the heart.

Then, what is to be done?

Work in this holy wilderness is our only occupation, as follows:

If the monk as human being seeks asceticism, worship and piety, and fulfills his officially required work, which is to refuse the devil’s counsel from the first impulse in the mind, no matter how perservering and repetitious, with a total refusal in mind, heart, and body, then the result will be that the Spirit of God will enter at once, and with His power, put a stop to the expansion of the idea, thus cutting it off, stopping its movement instantly; for man need not be tried beyond his endurance. Thus the heart becomes joyful and the spirit enveloped in a feeling of victory and joy [4].

Insomuch as the devil repeats his work and the monk repeats his refusal, the Spirit continues is work in all confidence and certainty.

1. An Example of the Sin of Lying

It is the devil’s easiest sin into which he makes great people fall. If a spiritual man starts his life with God in truth, honesty, and strictness, especially in relation to all the kinds of lies, he feels a spiritual force surrounding him, protecting, helping, and hleading him. If it happens and he distractedly commits a lie unintentionally and unheedingly, he will immediately feel that the power surrounding and protecting him has left him, and that he has become ashamed of himiself like a man naked. If he can at once correct his mistake and ask God’s forgiveness and the person to whom he lied, acknowledging his lie, then the protective power will return as it had been and increase.

2. An Example of the Sin of Fornication

The ancient fathers say that the stirring of the sex members is the first to be influenced by the action of the mind’s devil, to the extent that they said that the devil is “the holder of the members.” Here I draw the ascetic monk’s attention to his eyes and feelings that must concentrate on any of the members stirring so as to realize that the devil has entered the body and is on the point of spoiling it. With all awareness and care must he forbid their stirring, not even for a second, even if he must awake, terrified and disturbed, to control his members. Herein lies an involuntary relation between the mind, heart, and members, but is stopped by invoking the name of Jesus even up to one hundred times, until the members calm down and the devil departs. It is a temptation all youth undergo, but under discipline and restraint, the vigilant Spirit will swiftly answer, for sure, to the sons who cry out day and night.

3. An Example of Anger and Hostility

They are two inseparable sins. Man’s anger makes the devil lead him to hostility. Antagonism is darkness and death according to Saint John in his First Epistle. He who is angry with his brother for invalid matters, according to Our Lord, “shall be liable to judgment” (Matt. 5:22.) The word “anger” here means the “violation of Christian love.” The devil lies in waiting, so that when man’s heart is stirred by anger, he on the spot stirs the heart to hatred. Antagonism in Christianity equals falling into the devil’s arms.

Therefore, if the enemy begins to stir the mind to anger, remember that the devil is waiting to embrace you to become his own by leading you to hatred.

It is for that reason that Christ said, “Love your enemies” to sever the devil’s line of return.”

I leave you now in the love of Christ and the care of the Holy Spirit to be children of His grace, the sons of Sheheet, the weighing scale of hearts.

Father Matta El Maskeen
The Commemoration of the Return of Saint Macarius’ Body to the Wilderness of Sheheet
August 25, 2001