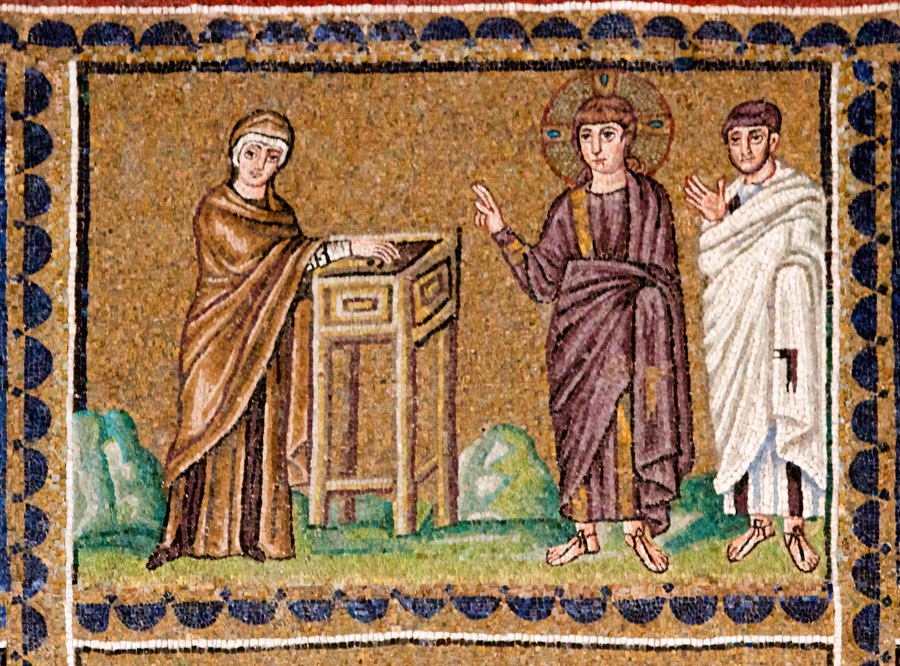 One day some people from a church visited a rich farmer to ask him to make his pledge for the coming year. The farmer filled in an amount that was pitifully low, much less than the poorest member of the congregation would give. One of the visitors looked at the farmer and said, “We really thought you would be able to do better than this.”

The farmer was astonished. He stood up as straight as he could and said rather bitterly, “Well, I gotta live, don’t I?” One to the visitors – perhaps the youngest and most inexperienced one – said, “Why?” Then they left.

A few days later, the farmer rang the doorbell of the man who asked him that troubling question. He was a bit sheepish but he proceeded as one who knew what he must say, “I’ve been trying to answer your question,” he said, “and it isn’t easy. Why do I have to live? I guess I need a pretty big reason, don’t I? And I’m not big enough all by myself.” He asked for a new pledge card and filled in an amount in keeping with his income. “Yes, I can do much better,” he said, “and maybe that’s the beginning of a reason to live.”

The widow gave all she had and Jesus praised her. She gave sacrificially. “I will not offer unto the Lord my God that which doth cost me nothing.” (2 Sam. 24:24) The widow, twice-afflicted, deprived of a breadwinner, poverty-stricken, held in her hands two copper coins which make one penny. Into the temple treasury went both coins. She could have kept one for herself but she didn’t. Christ’s verdict was that she had given more than all the rest. “For they all contributed out of their abundance; but she out of her poverty has put in everything she had.” Why did Jesus praise the widow?

Perhaps He saw what we sometimes fail to see, that when people are no longer expected to sacrifice for a great and worthy cause, the cause is doomed. A church without an altar is no church but a hall or an auditorium. Christianity without a cross is counterfeit! Religion without sacrifice is not religion at all but mere philosophy. Perhaps we can learn from this widow to work our giving with the sign of the cross and to find to our amazement how much the Lord loves and blesses a cheerful giver. Of course, we would be the first to complain that with prices the way they are today we cannot possibly give sacrificially. I’m not saying that we should not provide for the needs of our families. For this is part of our Christian stewardship.

As St. Paul writes, “If any one does not provide for his relatives, and especially for his own family, he has disowned the faith and is worse than an unbeliever” (1 Tim. 5:8). God wants us to provide for our families as much as He wants us to support His work through the church. The point I wish to make is that 95% of all the religious giving done by Americans today is out of our surplus. After our money is all spent (or at least contracted for) for all that new jewelry and cosmetics and three times as much for clothing as any human being requires, and pretty plush vacations, after all this, then we scream that we cannot be expected to give more sacrificially. The widow teaches us one thing: if our giving is not sacrificial, it isn’t Christian.

Secondly, we notice that our Lord was watching the people as they were placing their money into the temple treasury. “And he sat down opposite the treasury, and watched the multitude putting money into the treasury” (Mark 12:41). Perhaps we need to be reminded to day that Jesus watches, that He knows what we give, that the collection plate in which we place our gift is in reality not a brass plate but the nails carred hands of our Lord. Jesus always sits over against the treasury-watching!

First, They Gave Themselves

Paul speaks here of the generosity of the Christians in Macedonia. Though they were poor, they gave beyond their means to help their suffering brethren in Jerusalem. Paul says that this happened because “first they gave themselves to the Lord.” Here is the essence of all true giving to God: the giving of one’s self. The gift without the giver is always bare and empty and perhaps even hypocritical. There are people who send a check to the church once a year but they do not participate in the life of the church. They give money but they do not give themselves. This is not real giving. This is not true giving. This is not Christian giving. Giving involves much more than writing a check. The check is really worthless unless it symbolizes the gift of oneself. Someone said once, “I had been giving my money to God all my life, but I had never given myself.” Without the giving of oneself no gift has value. When the offering plate was passed in church one day, a little boy asked the usher to place the plateon the floor. The lad then stepped in the plate and said, “I wantto give myself to God. It is all I have to give.” “First they gave themselves to the Lord.”

Let us not Love in Word, but in Deed