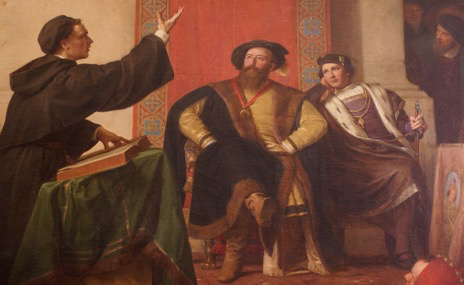 In July 1519, Martin Luther, the founder of the Reformation which would ultimately give rise to what we call the Protestant churches, engaged in a debate with a famous Roman Catholic apologist named Johann Eck in Leipzig.

Eck was a Papalist, meaning he was in favor of the Roman Catholic doctrine of the primacy of the Pope over the entire Church, a doctrine that was unknown to the Early Church and never accepted by the Holy Orthodox Church. Martin Luther, too, was against this doctrine, albeit for entirely different reasons. As a young Roman Catholic monk-priest, Luther had questioned several points of Roman Catholic doctrine, including things like indulgences, purgatory, and of course, papal primacy. Sadly, the one doctrine Luther did not question was the worst of them all, the Filioque, or the Procession of the Holy Spirit from the Father and the Son (as opposed to the Father only), which he accepted and even included in his statements of faith, like the Augsburg Confession.

The debate between Luther and Eck focused on many of these issues, especially papal primacy.

When Eck argued that the fullness of the Christian Church lay in Rome under the authority of the Pope, Luther did something that would surprise both Evangelicals and Orthodox alike today. He invoked the Orthodox Church as an example of true Christianity for the past thousand years. Indeed, he held up the Orthodox Church as a source of truth to show that the Roman Catholic Church had deviated from the principles of the Early Church. Archpriest Josiah Trenham even quotes Luther as saying, “The truth lies with the Greeks” (i.e. Orthodox) in his recent book, Rock and Sand.

Sadly, despite several respectful exchanges between the Holy Orthodox Church and the Protestant reformers in the subsequent decades, the latter were not willing to abandon the numerous innovations in the faith that they had introduced in the Reformation. Even more tragic is the fact that the nature of the Reformation itself, which gave every Protestant the right to interpret the Holy Scripture and the faith in his own way, gave rise to countless divisions among Protestants, which is why we see an endless list of different Protestant churches like Lutheran, Baptist, non-denominational, etc. in our society. Although they came from the same 16th c. Reformation led by Martin Luther, they are hopelessly divided on matters of faith. In fact, many prominent non-denominational churches today would consider Martin Luther a heretic or at least misguided, because he stood for things like Communion of the Body and Blood of Christ, the Ever-Virginity of the Holy Theotokos Mary, and the pure example of the saints of the Church. Most modern Protestants have never heard such things preached in their gatherings.

The sad irony here is that Martin Luther rebelled against the primacy of the Pope of Rome and actually saw the truth of Holy Orthodoxy, but unfortunately, he chose to make everyone a pope instead, which led to even more division and confusion.

As for us Orthodox, the simple question is, If Martin Luther saw the truth in Holy Orthodoxy, should we be influenced by Protestantism in things like Protestant-style songs and art? Or should we share more of the truth of Orthodoxy with our thirsty Protestant brothers and sisters? I absolutely believe it is possible to once again have a respectful dialogue with these sincere, good-hearted people who are thirsty for the truth, but in order to do so, we must understand our identity as Orthodox Christians, members of the Church that possesses the deposit of the Apostolic faith and the fullness of the truth.